davide buccheri: How important are recessions for the S&P 500?

How important are recessions for the S&P 500?

Investors often worry about recessions when investing in the stock market. This makes logical sense, as a slowdown of the economy as a whole should have an effect on the performance of companies and, consequently on the valuation of their stocks.

But just how important are recessions?

For the analysis, I filtered the data to find declines in a given quarter of the S&P 500 which are greater than 10%, 15%, 20%, or 25%. Considering we’re working with quarters, these are all very considerable declines, which would result in annualised loss rates of between 34% and 68%.

The chart below shows the historical instances of these declines, superimposed on recessions. 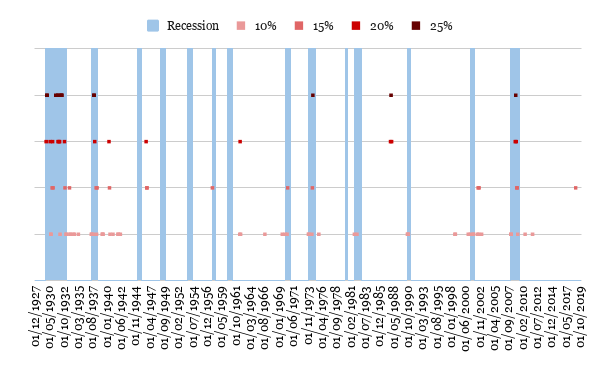 At a first glance, it seems clear that historically most declines have occurred around recessions. However, the picture becomes more complex when looking at the data. In actual fact, only 58% of all the considered declines occurred during a recession.

In particular, it appears that the largest declines have a greater tendency to occur during recessionary periods. The only exception to this is the 1987’s Black Monday, which caused a -30% quarterly decline in December 1987, in an otherwise economically calm period.

The situation is more evenly spread for declines of 10% and 15%. In actual fact, we’ve already experienced three of these since the financial crisis, with the last being the largest, in January 2019. The other two instances of this were in July 2010 and October 2011. Interestingly, all of these can probably be ascribed to weak periods for the European economy.

This idea seems to be supported by the data. The table below adds to the picture EU recessions and focuses on the period from 1960 onwards.

It is clear how a significant portion of S&P 500 declines (around 23%) were a direct result of weakness in the European economy only, even though the US were faring well in that same period.

Interestingly, on average, recessions in both the US and EU seem to have a very similar effect on the market. In actual fact, the average recorded decline during US recessions is 15.28%, against 14.82% for EU recessions.

Things change, but only slightly, when we consider EU recessions that occurred outside of US recessions. In these instances, when a large decline occurs, it averages at 13.38%.

The chart below shows the declines that fall outside of both EU and US recessions. 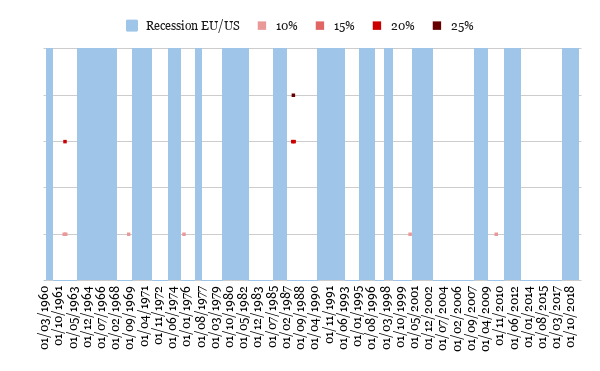 It is interesting to see how actually very few of them hit in a period of relative market calm. The only examples since 1960 are:

As for the opposite situation, interestingly, recessions from 1944 to 1961 do not seem to have caused significant market corrections. These were overall very calm years, with only two major corrections: -21% in June 1946 and -15% November 1957.

With the exception of these 15 years, all other recessions seem to have been accompanied by significant market corrections.

In addition, it seems that a significant proportion of the other declines can be attributed to periods of weakness in other world economies, but especially in the EU, which accounts for a further 23%. Another 5% of market corrections occurred just before, albeit outside of, a recession.

With the exception of the 1946-1961 period, all recessions were accompanied by significant market corrections.

This is quite an interesting conclusion, as it shows the importance of proper macroeconomic analysis when investing in the stock market. In actual fact, with a robust investment process, it would have probably been possible to manage as many as 85% of all major market corrections. This is definitely enough to have a tangible effect on any investors’ portfolio performance.