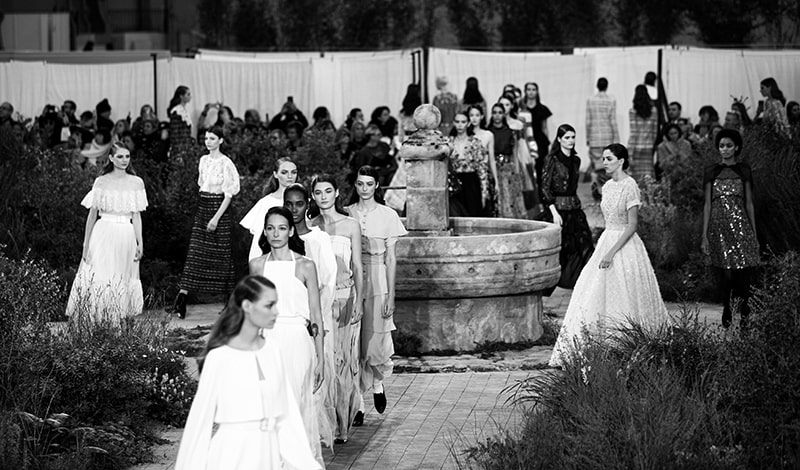 Paris Fashion week’s 2020 Haute Couture runway shows were a bittersweet event. From the announced retirement of Gaultier from runway shows to the parade of shimmering gold gowns from Dior, there was much to be admired this year.

Perhaps most intriguing was Chanel’s showing that was held in the midst of a garden reminiscent of Aubazine, the orphanage in which Chanel was raised following her mother’s death. Striding along paths crisscrossing bushes of tomatoes and lavender, the models displayed a collection inspired by one of Chanel’s most popular styles, the tweed suit. This made for quite a clear contrast against a surrounding background of hanging white linen sheets.

Tweed has often been associated as a warm choice of fabric for colder months of fall and winter. To see it play such a prominent role in a spring/summer fashion show may seem odd. However, this traditionally heavy and rugged fabric has evolved over the years thanks to blending with other fabrics. It has now become a lightweight and softer material that has worked well on the feminine form as attested to by Chanel’s classic two-piece tweed suit.

With the dense fabric made into something more wearable in warmer months, do not be surprised to see a trend catching on during the coming months. Tweed is an ideal choice, particularly for an evening that may turn a little chilly. The monochromatic tones featured in the collection also make for a toned-down yet chic look whatever the event.

Surprisingly functional in design for a high-fashion haute couture show, the outfits featured clean lines and prominent use of black, grey, and white coloring. Some skirts and dresses were layered with underskirts or sheathed in tulle. A few pastel designs were mixed in, with two in particular featuring embellishments of glass designs possibly inspired by the stained glass windows of the Aubazine. Several other eveningwear bejeweled outfits brought to mind starry nights and glittering lights. Embroidered floral motifs were also included in the eveningwear selection.

In keeping with the icon’s style the designs were comfortable and demure, something the models must have appreciated in the chilly weather. With many outfits sporting Peter Pan collars paired with modest heeled closed shoes and folded over plain socks, the models could have been mistaken for prim schoolgirls pacing through the garden. The loose fit of the designs did an excellent job of bringing focus to the outfits rather than the models’ forms.