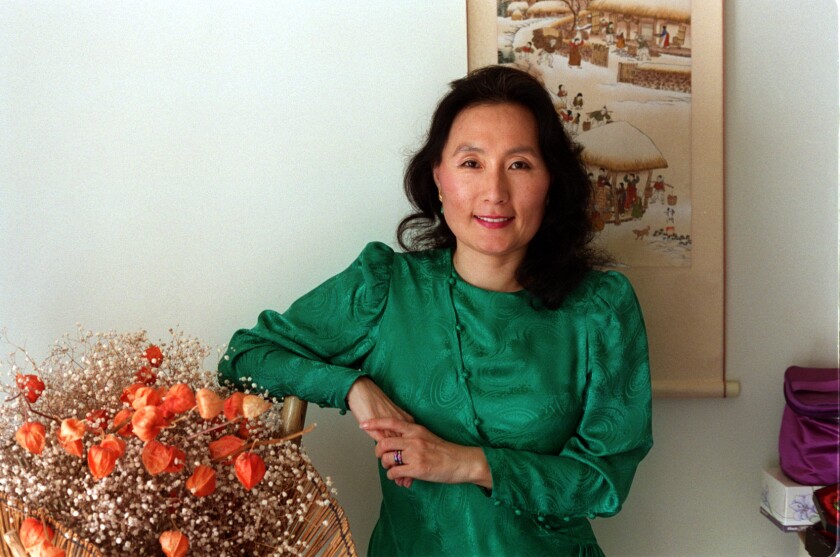 When riots broke out in Los Angeles in the spring of 1992, few local reporters covering the historical unrest were able to interview the Koreans whose neighborhoods were suddenly besieged by violence. They couldn’t speak the language.

In the eyes of the Korean American Journalists Assn., that was a huge problem. So, on the heels of the riots, the organization implored the Los Angeles Times to hire a Korean-speaking reporter who would cover the community with thought and fairness.

That is how K. Connie Kang, who is thought to be the first Korean woman reporter in the United States, came to work at The Times in the fall of 1992.

Kang died last week from pancreatic cancer, according to longtime friends. She was 76.

In the pages of The Times, Kang covered the city’s Asian communities in earnest and with understanding, said Hyungwon Kang, a former photo editor at the paper who was mentored by Kang.

“She would be flooded with calls from Korean Americans who wanted to get their stories out there, because no one else in the mainstream media spoke their language,” Hyungwon Kang said.

When she was a little girl, Connie Kang and her family fled her ancestral homeland in what is now North Korea. She grew up in Okinawa, Japan, and her love for the English language was fostered at an international school there, according to a biography of Kang in “Distinguished Asian Americans: A Biographical Dictionary.” Her father, an English and German teacher, was among the first to embrace Christianity in Korea at the turn of the century.

The family would later settle in San Francisco. “The City by the Bay, where Korean independence fighters raised money to try to free their homeland from Japan’s yoke, gave my parents their home away from home,” Kang wrote in a 2000 column for The Times.

“She was almost a saint,” said Lee, believed to be the first Asian immigrant to work for a mainstream daily newspaper in the U.S., the Kingsport Times-News in Tennessee.

“She was doing it because she felt not only an obligation to speak for the second generation of Koreans in America, but also to speak for the voiceless and powerless immigrants who brought them here — most who were monolingual, many who ended up in ghettos.”

Kang was a meticulous, sensitive observer and approached her job like an anthropologist, said Hyungwon Kang.

“Her interviews were much more thorough than most other journalists I’ve worked with,” he added, “and she was super cautious about the words she used. It’s what made her a good writer.”

Connie Kang covered religion in her final years at The Times. After leaving the paper in 2008, the deeply devout Christian decided to become a minister. She graduated from Fuller Theological Seminary in 2017 and shortly after passed the U.S. Presbyterian Church’s ordination exam. Her dream was to build a Christian school in North Korea.

Kapson Yim Lee, a longtime friend of Kang’s, described the writer as “aesthetic-minded.” She was known to wear colorful wide-brimmed hats, and preferred to drive with gloved fingers. She loved to grow flowers, especially orchids.

Kang will be buried next to her parents and younger brother in San Francisco, according to Hyungwon Kang.

In a 2018 email to the photographer, Connie Kang said she purchased additional space on the family plot for a memorial headstone with the names of her ancestors.

“Of course their remains are in North & South — I presume all destroyed by the war & communist takeover of my family’s vast estate,” Kang wrote.

“Let us continue to live with gratitude & hope,” she signed the note. “Life is a gift; the promise of Eternal life with God is the greatest gift of all.”

This website uses cookies to improve your experience while you navigate through the website. Out of these, the cookies that are categorized as necessary are stored on your browser as they are essential for the working of basic functionalities of the website. We also use third-party cookies that help us analyze and understand how you use this website. These cookies will be stored in your browser only with your consent. You also have the option to opt-out of these cookies. But opting out of some of these cookies may affect your browsing experience.
Necessario Sempre attivato