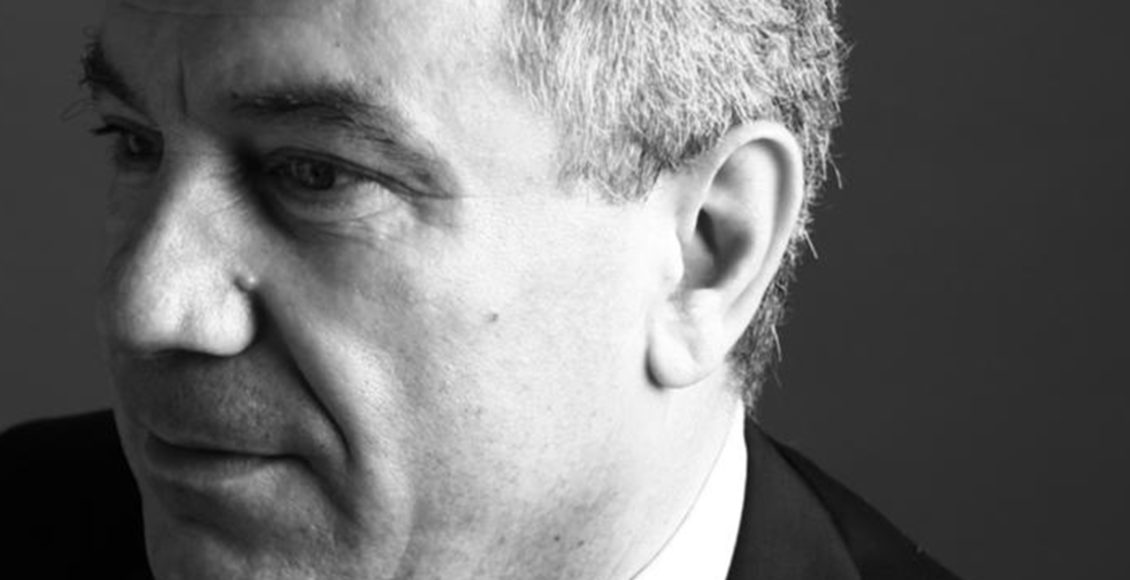 When a banker turns to food, he puts his money where his taste buds are, and that’s what Roberto Ugolini, CEO of Watermark group, is doing, writes Veena N. 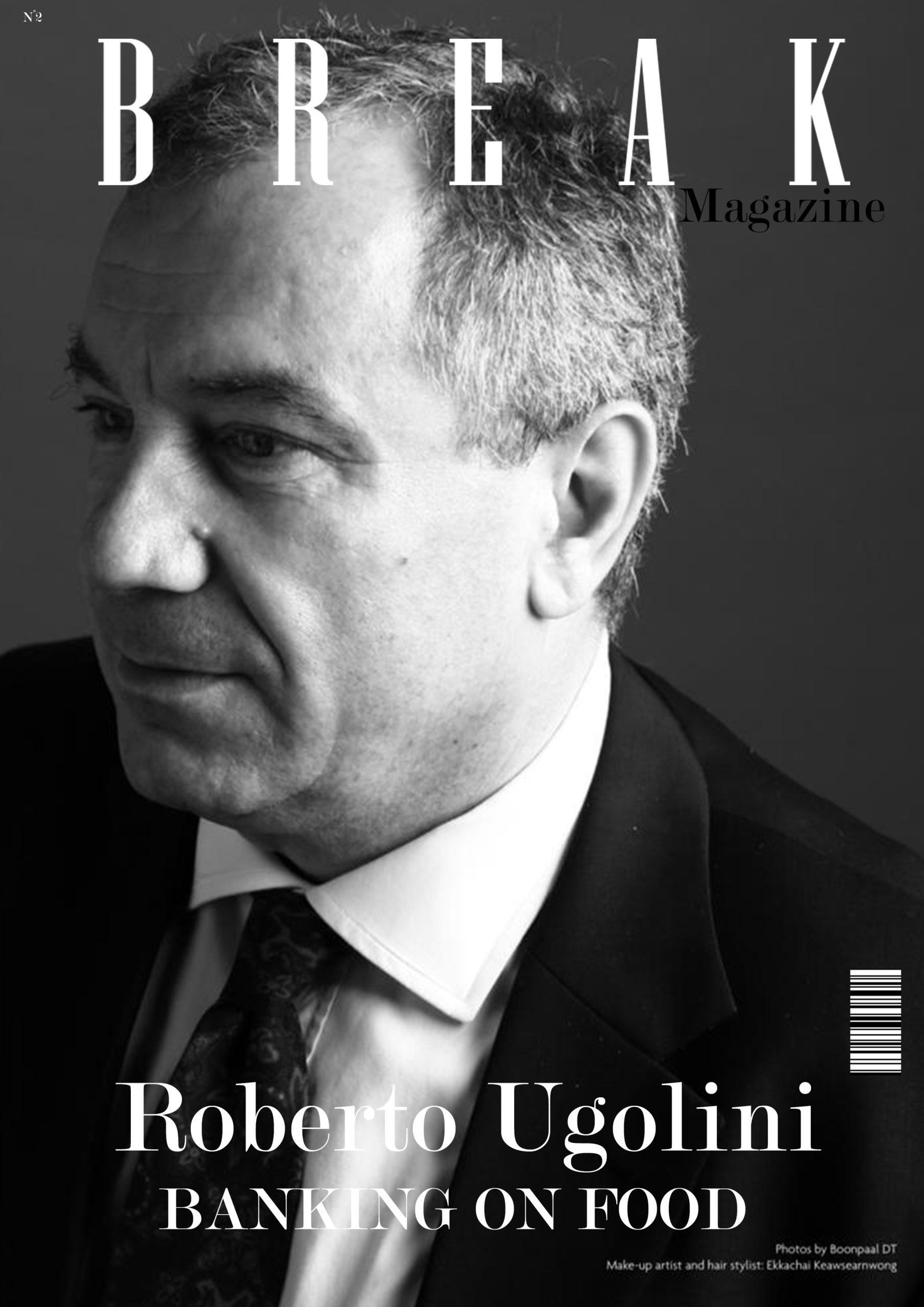 If a banker born in Rome tells you that he is starting a restaurant in Phuket, what would you say? A touch of sun, perhaps? Five years later, if he has nine outlets in two cities and is the go-to guy for Italian sauces, what would say then? A touch of magic? Restaurants, bars, bakeries, charter, catering, hotel and clubs – all this in a short span of five years.

This is the story of Roberto Ugolini, a shrewd banker and connoisseur of healthy fine food from Rome, Italy. After graduating in banking, he joined the Intesa Sanpaolo as a private banker. A decade later he moved to Unicredit. As a private banker based in Singapore, he discretely helped the rich and famous manage their money. He lived a charmed life – flying all over South-east Asia and Australia meeting clients, making money for them. But he was looking for something else too. Sometimes passionate, fun and of course, profitable too.

Meanwhile, he continued as a private banker, watching the ebb and flow of the business world. “Working in the banking industry, I got to know a lot of business owners. In 1997, when the crisis Thailand, I realized that the only industry that survived was the food industry”, Ugolini said.

When he first visited Thailand in 1994, he quickly succumbed to the charms of the sun, sea and beaches. He bought a place in Phuket and visited as often as he could. “I became friends with the owned of Limoncello in 1994”, he says. Slowly, he realized that having a restaurant of his own would be a dream come true.

This fortuitous revelation, the banker’s knowledge of the food industry and his passion for fine healthy food fused seamlessly and thus Limoncello was born in Phuket. “In those days, Sukhumvit 11 Limoncello was the only one. We opened another one in Phuket in 2006,”he says recalling his first foray into the world of Italian cuisine. It was a joint venture with a friend and it closed in a while. But the banker had already given way to the man who loved food.

Hailing form a family of farmers, Ugolini knows the delectable taste of food fresh from the farm. When he starts talking about “fine, healthy, affordable food”, Ugolini’s hands fly expressing his thoughts better than any word could. His English and Italian fuse into one another, as he talks about food  as the great connector in this world.

“Food brings people together. Everyone is a guest. Rich or normal, all are equal when they come to my restaurant”, he says.

Fresh is a key motif that runs through his food. There are about 200 Italian restaurants in Thailand, but he could not find fresh pasta anywhere. And so, “in our restaurant we make fresh pasta always. We do not use preboiled or frozen pasta. It is fresh, made right then,” says Ugolini with great pride. 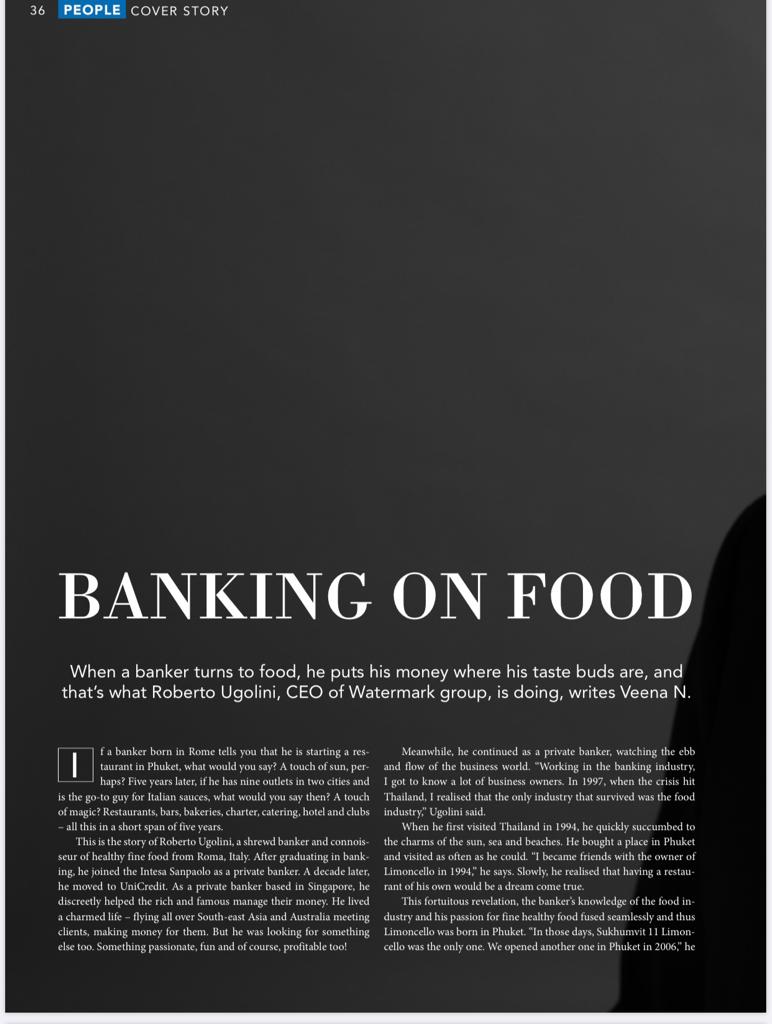 “My mother would drive the tractor to the market to sell the produce,” he recalls. “At home, we ate lots of vegetable and pasta. I love traditional cuisine, not modern.” Pasta carbonara, handmade pasta… “that’s what love, care and good health taste to Ugolini. And that is what he attempt to resurrect in his own restaurants everyday.

And so, two months before the 2007 global economy crash Roberto left banking to become a restaurateur. When he told his clients that he was leaving banking to follow his dream, they asked him what they should do! “Sell everything and hold your money,” he said. “To this day, they remember my advice. None of them lost any money” he said with pride.

Why did you buy Watermark? I asked him. The banker immediately came to the fore. The brand was nine years old, and already quite strong.  They had a good reputation. If you add the location to it, it was a great deal! Ugolini loves Phuket, and the Phuket Marina is his special favorite. “Watermark restaurant was a unique location, if you can eat beside yachts,” he says with excitement. No wonder the restaurant won several awards, including the Thailand Tatler best restaurant prize eight times!

Since he bought the Watermark Restaurant in Phuket, in 2008, Ugolini has never looked back since then. His love affair with the Marina led to a charter business that also includes fine dining.

If the banker decides the location, the farmer adds the ingredients. The key to success is authenticity, Ugolini believes. “We source about 90 percent of our ingredients from Italy. For the authentic flavor, we need sun dried tomatoes, basil that grows in those specific places. Otherwise the flavor is different” He says. Chicken, pork and some vegetables are sourced locally, but all key ingredients and spices and herbs are sourced from their areas of origin.

Ugolini’s has received certification form Ospitalità Italiana for using fresh ingredients. As a farmer’s son, freshness is not negotiable for him. As a banker, knew that to make good food affordable, he needed numbers on his side. So it was time to expand his business. And so, a factory in Phuket that makes croissants, sauces, everything that people who want real Italian fare would want. This lets him import fresh food from Italy every week.

All the hard work and passion does make a difference, he says. He takes great pleasure in the fact that word of mouth is the most effective medium of advertising for the Watermark Group outlets. “We also invite food reviewers, journalists and bloggers. We have an email newsletter with all the specials and offers every month,” he adds.

Bangkok has many fine dining places. Is the market crowded? No, he says. There is always a place for good restaurant. There is always a place for good service, affordable price and good food. “In fact, it is good to have so much fine dining because it makes Thailand and all restaurants attractive for people around the world. This keeps your standards up as well,” he adds. Compared to 15 years ago, the customer has more choice of good restaurant now. “Sometimes, over 10 percent of our customers come in from Hong Kong,” he says. The global financial crisis in Europe is also been good for business. “It means we can get better price and offer more affordable food here,” he says. The idea, for him, is to be cheaper and better than other people. He is especially proud of his wine list, and the strong Baht allows him to buy better wine for his customer. His prices are affordable, the quality impeccable. The result? Even their newest restaurant is busy! In less then a month, almost 100 people visit Watermark Group’s restaurant every day.

What next? “We have a five year business plan. We bought many outlets in good locations. Now we are stream-lining the business, upgrading service, and products”. On the anvil are mergers, tie-ups and more. This year Watermark Group will bring several exciting concept restaurants to Bangkok.

Club Nove Wine Bar in ThongLor Soi 9 will have four different cuisines – Japanese, grill and steak, Italian, and Tapas – under one roof.  A dietic menu will list the calories of each item on the menu; Bangkok’s First Truffle bar, in cooperation with Urbani, the world’s largest truffle company; An ice cream bar in Sukhumit Soi 9 – Make your own ice cream, add your own toppings, and then bill it. And finally, collagen based food. After that, the watermark Group plans to step into Cambodia, Vietnam and Myanmar where the potential is high.

In building an empire, the challenges are plenty some are special to this business like finding good people who have a passion for food; other are specific to this country, like the lack of state support for investors form abroad. Some problems, like retaining trained staff, are common across boarders and sectors! But then that’s what makes life worth living, he says.

Who is successful? Ugolini asks rhetorically. “The one who can find a solution to the problem. Problems make me happy, because I can find solutions then”, he adds. Everyday is different, not boring. Implement new ides everyday. Tryout new dressings, new tastes… What is important is to be positive.

What does Roberto Ugolini eat? Fine and healthy food, the kind he ate at home when he was little. For him, Italian, Japanese and Thai the three best cuisines in the world. “I love fish more than meat.” He cooks for his children whenever he can and they love it!

“I have always believed where there’s a crisis, there’s an opportunity. Take Thoresen Thai Agencies – one of the main problems with TTA was that they didn’t have someone in charge at the top. They needed direction and guidance. When I saw this, I saw an opportunity ”