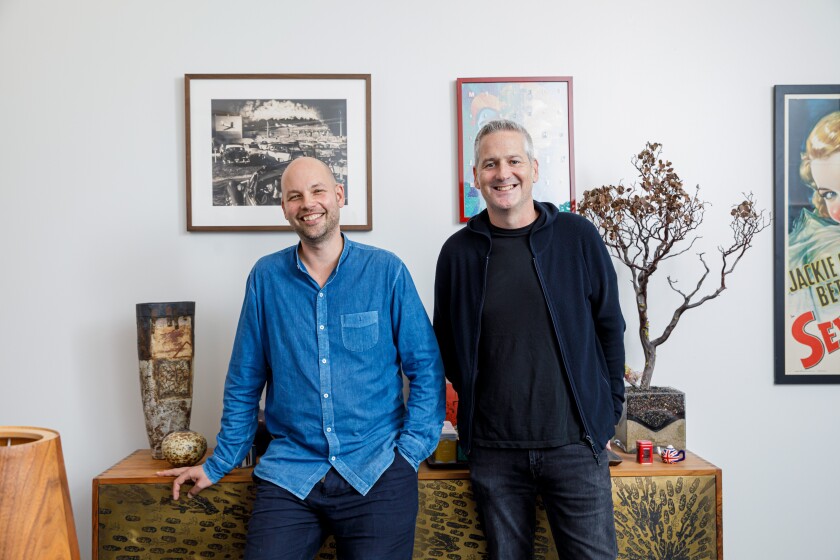 Agency giant Endeavor owns a part of ‘Killing Eve’ and other shows. Not everyone is happy about it

On the corner of Wilshire Boulevard and Rodeo Drive, across the street from where William Morris Endeavor hosts its star clients, the talent agency’s parent company houses a very different business.

Endeavor Content, on the fourth and fifth floors of the Wilshire Rodeo Plaza building in Beverly Hills, is the fast-growing corporate sister of WME tasked with investing in films, television shows, podcasts and production companies.

The separation is deliberate. Launched nearly two years ago, Endeavor Content is part of the larger company’s aggressive — and controversial — strategy to expand beyond traditional deal-making into the business of owning content itself. The firm’s content push has put it in the crosshairs of the Writers Guild of America, which has singled out Endeavor Content in its protracted battle against agency practices that it says create blatant conflicts of interest.

Endeavor Content says it has invested in or sold more than 100 films and shows, underscoring its rising influence in Hollywood. Executives declined to disclose financial information but cited the hit BBC America drama “Killing Eve,” which is about to start production on its third season; and the 2018 Paramount Pictures movie “Book Club” as early successes. Additionally, the unit is putting its muscle behind major producers including Peter Chernin and Bruna Papandrea, as well as up-and-comers like Minhal Baig, whose directoral feature debut, “Hala,” was picked up by Apple.

“In a world of media consolidation at an unprecedented scale, the size and scale and reach of media companies today is unlike anything we’ve ever seen, and the idea of ownership and creative freedom is under threat,” said Endeavor Content Co-President Graham Taylor. “So how do we help create an alternative and help create leverage for people?”

Endeavor’s growing interest in film and TV financing comes as the broader agency business tries to find additional sources of revenue. Talent representation is notoriously unpredictable, with major clients and agents often defecting to rivals. Agencies have also been squeezed by the sharp decline in TV syndication revenue and the virtual disappearance of the DVD market.

But the demand for shows is booming, thanks to streaming video companies such as Netflix, Apple and Amazon Prime. The major studios, which are in the midst of a wave of consolidation, are increasingly creating shows to air on their own platforms rather than selling to other networks. That has created an opening for Endeavor to bet on shows and movies the big conglomerates are leaving on the table, executives said.

Endeavor Content launched in October 2017, partly as a combination of existing businesses including its TV and film sales, finance and advisory arms. The group has more than 200 employees in five areas: film, TV, nonscripted programming such as documentaries and reality TV, and a relatively new podcasting business. Endeavor Content invests its own capital in about a third of the projects it touches, usually taking a minority stake.

About half of Endeavor Content’s business comes from WME clients, Taylor and Co-President Chris Rice said. But the company has taken pains to distinguish between the two businesses, they said.

“We were financing many films and television shows with third-party capital,” Rice said. “As we started putting our own capital alongside that as an additional tool for creators, it made sense to take all these different things the company was offering and put it into one very clearly labeled, clearly separate entity.”

The specter of agency-related companies financing TV programming and films has long been deeply contentious, with critics including the WGA saying it creates conflicts of interest when agents negotiate deals with executives at their own companies. The situation, critics say, echoes the 1962 antitrust case in which the U.S. Department of Justice forced representation giant MCA to get rid of its agency business in order to acquire Universal Studios.

The WGA earlier this year told its members to fire their agents in part because of the rise of such companies. The writers also take issue with the decades-old practice of taking packaging fees (instead of the traditional 10% commission) for lining up writers, producers and actors for films and shows before pitching them to studios. The writers union, which has sued WME and others over the practice, says agencies have prioritized these fees over their traditional duties of representing clients.

But Endeavor, led by Ari Emanuel and partly backed by private equity firm Silver Lake Partners, has been by far the most active player in the space. The WGA blasted the company in a recent open letter to investors after Endeavor filed for a long-anticipated initial public offering. The IPO, which many investors anticipated would happen this summer, is now planned for September or later, sources say.

“Acting as an employer and representing a client in salary negotiations are fundamentally at odds,” the guild said. “An employer’s incentive is to maximize its profits and keep labor costs low, while the agency is duty-bound to get the best deal it can for its clients.”

Endeavor executives don’t deny that conflicts exist. However, they argue, the issues are managed by having third-party lawyers present during negotiations and by securing better deals for creatives.

“You have agents at WME whose job it is to voraciously try to get the most amount of money for their clients, which they do,” Rice said. “We believe WME agents come after us as aggressively — maybe even more aggressively in some cases.”

WGA West President David Goodman said that while Endeavor may be offering attractive terms to lure talent as it grows its business, the long-term implications of agency-affiliated production companies will be disastrous for writers. He dismissed the notion that simply having an attorney overseeing the deal-making process would resolve the problem.

“The agencies want to try to convince the writers and the town that there are ways around it, without recognizing that, at the core of it, they’re violating their duties as our representatives,” Goodman said.

But Endeavor Content executives maintain that their business is good for creators because they help get projects green-lighted. The company financed seven movies for release in 2018 and 2019, including “Book Club,” a comedy starring Diane Keaton and Jane Fonda. Endeavor stepped in to co-finance at the 11th hour when the original backers grew concerned about the risk. They sold the rights to Viacom’s Paramount for an estimated $10 million, and the movie grossed more than $100 million at the box office.

Executives pointed to movies they’ve championed made by diverse filmmakers and new talent. Endeavor pitched “Hala,” about an American Muslim teenager who grapples with her faith and traditional upbringing, to multiple financiers before deciding to invest their own capital and get it made at the budget Baig wanted.

“Many, many financiers looked at it and were nervous about it,” Taylor said. “We thought it was a neat opportunity to support her and her vision.”

Endeavor Content has 10 films in production or postproduction, Taylor and Rice said. One of its highest-profile bets is “Just Mercy,”the Michael B. Jordan civil rights drama that Warner Bros. will release in December. The movie is part of the diversity policy WarnerMedia launched in September.

Another significant part of Endeavor’s business is investing in numerous production companies. Working with Endeavor was an ideal situation for “Hidden Figures” producer Peter Chernin, whose company Chernin Entertainment previously had a TV deal with Universal Television. Chernin and Emanuel negotiated a deal in which Endeavor Content would put up half the costs of TV productions and split the profits. The company’s big-budget Jason Momoa series “See” is set to debut on Apple’s upcoming streaming service.

“I was looking for maximum creative flexibility and interested in building a television studio, and this felt like a good way to do that,” Chernin told The Times.

Endeavor also owns a minority stake in producer Bruna Papandrea’s company Made Up Stories, which has announced four series that it is making with the company, including an adaptation of Tina Brown’s “Vanity Fair Diaries,” which it is developing for TV. Hulu in May said it had ordered a new series backed by Endeavor from Made Up Stories based on the book “Nine Perfect Strangers,” by the author of “Big Little Lies.” “Nine Perfect Strangers” is expected to air in late 2020.

“I feel there’s a lot of disinformation out there about lack of transparency, and for me that just has not been the case,” Papandrea said. “Never once have I had a conversation where I’ve been asked to work with a WME client over a person represented by another agency.”

Endeavor also financed the documentary mini-series “Wu-Tang Clan: Of Mics and Men,” which aired on Showtime in May. The “Wu-Tang” project came from hip-hop media brand Mass Appeal, which has also secured a podcasting deal with Endeavor.

“When you sell something to a studio, you don’t have as much ownership,” said Mass Appeal Chief Executive Peter Bittenbender. “With Endeavor, it was very hands off.”

As for the disagreement with the WGA over units like Endeavor Content, there are no easy answers, said veteran entertainment industry attorney Kenneth Kleinberg.

“It’s an obvious issue of conflict of interest,” the Los Angeles-based attorney said. “The question is, what is the remedy? It seems as though it’s not a new problem, and finding a remedy is elusive.”

Review: ‘Jay Myself’ salutes both a building and its longtime owner, photographer Jay Maisel

Vision, drive, passion and just a hint of chutzpah mean entrepreneurial success for…