Appreciation: ‘Easy Rider’ made Peter Fonda an icon. ‘Ulee’s Gold’ made him an actor to remember 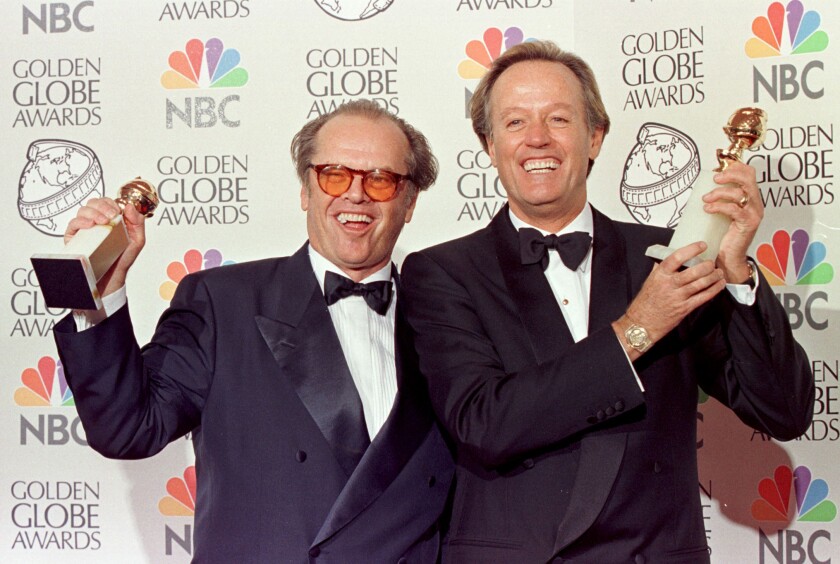 In the 1997 drama “Ulee’s Gold,” Peter Fonda plays a lonely beekeeper with a persistent limp, a gruff demeanor and a lifetime’s worth of regrets. Nearly everyone in his small Florida town knows the troubles he’s seen, though for the viewer meeting him for the first time, Ulee Jackson will initially read as something of a mystery. He’s a sturdy, dependable family man — “an old-fashioned ties-that-bind kind of guy,” in another character’s half-mocking, half-admiring words — but there is much more to him and his life than can be gleaned from his unwaveringly solemn expression.

Over the course of this patient, stirring film from the writer-director Victor Nuñez, the multitudes contained in that expression will be laid gradually bare. Ulee’s face is the face of a Vietnam veteran, a grieving widower and a surprisingly shrewd tactician in a life-and-death emergency. As more than a few classic Hollywood lovers noted at the time, it is also, hauntingly and unmistakably, the face of the son of Henry Fonda — an association that might have distracted from this quietly immense performance rather than lending it an even richer, stranger emotional dimension.

At the height of his popularity, Henry Fonda was a beloved Hollywood avatar of plainspoken decency and dignity. He was our Tom Joad in “The Grapes of Wrath,” and he was also one of the few lonely men willing to speak truth to power in “12 Angry Men” and “The Ox-Bow Incident.” Peter Fonda, who died Friday at 79, didn’t do anything so iconically heroic in “Ulee’s Gold.” But in investing Ulee with taciturn eloquence, steady resolve and an ability to show both vulnerability and courage in the face of danger, he seemed possessed by the spirit of his father in a way that he had never before attempted or managed on the screen.

The elegiac echoes of “On Golden Pond” aside, it was a performance that went beyond mere mimicry or homage. (Still, it is worth noting that Henry Fonda was a skilled beekeeper and once starred in an ill-fated 1978 killer-bee disaster flick called “The Swarm.”) The story told in “Ulee’s Gold” is that of a man whose devotion to his artisanal craft is easy and intuitive, but whose commitment to his family is difficult and complicated. His love for his granddaughters and his son, who is in prison for robbery, is a love that costs him dearly, and it expresses itself not through sweet sentiments but through blunt, decisive action. In ways that Fonda acknowledged at the time and that seem only more poignant now, the performance felt like an act of reconciliation — an attempt to make sense of an emotionally distant father who cast a lengthy shadow over his childhood and his career.

“Ulee’s Gold” earned Fonda critical plaudits and industry accolades, including a Golden Globe win and an Academy Award nomination for lead actor. He lost the Oscar to Jack Nicholson, with whom he had appeared nearly 30 years earlier in “Easy Rider,” which Fonda also co-wrote and produced. In that 1969 classic of social and cinematic revolt, Fonda and Dennis Hopper didn’t just play cocaine-dealing motorcyclists riding their way across a fast-changing America. Both having been forged in the B-movie cauldron of Roger Corman (who produced several Fonda vehicles including “The Trip” and “The Wild Angels”), they became poster boys for an equally fast-changing American film industry, ushering in a new era of aesthetic restlessness and creative vitality.

The scion of a prominent Hollywood family thus became a lanky, long-haired icon of countercultural rebellion, an exemplar of a newer, nervier Hollywood that would chase away the creaky, hoary spirit of the old. That narrative didn’t entirely come to pass, of course. The ’70s may still be the most storied decade in American film, but audiences haven’t lost their affection for the golden age of the Hollywood studio system and the many glories, several Henry Fonda movies included, that it committed to celluloid

Despite the runaway success of “Easy Rider,” Fonda’s outlaw image didn’t always endear him to the industry. He took some admirably adventurous steps of his own, including directing the 1971 western “The Hired Hand,” the first of a few movies that paired him on-screen with Warren Oates. Lyrical and contemplative, it remains as movingly independent in spirit as any American film ever made, and a rare western of the era in which matters of feminism and family devotion, as embodied by Verna Bloom in the role of Fonda’s estranged wife, are more than a mere afterthought.

Fonda’s subsequent work as an actor was often erratic, peppered with roles in horror and action pictures that exploited his biker image but seldom connected with audiences or critics. The success that greeted his older sister, Jane, even with her own controversial moments in the spotlight, largely eluded him. It wasn’t until “Ulee’s Gold,” nearly three decades after “Easy Rider,” that he truly found his footing as a performer. That triumph brought about a late surge, the best of which may have been his turn as a slickly corrupt record producer in Steven Soderbergh’s 1999 crime yarn “The Limey.”

But Fonda’s signature performance is memorable for reasons that go beyond the recognition and goodwill it earned him, and even beyond the poignant echoes of his father’s legacy. It endures because of the way Ulee Jackson scrapes honey from a hive frame, the practiced skill and no-nonsense pride he clearly takes in his work and the sense that he prefers the company of his bees to that of anyone else. It endures because of the way Fonda often seems broken down beyond the ability of tears to express, the way he can flood a single, spare line of dialogue with feeling.

“I’m just all worn out,” Ulee says. It’s a fitting benediction for an actor who poured himself into his work, and for a character whose exhaustion was evidence of his humanity.

and more dance to see this week in L.A.