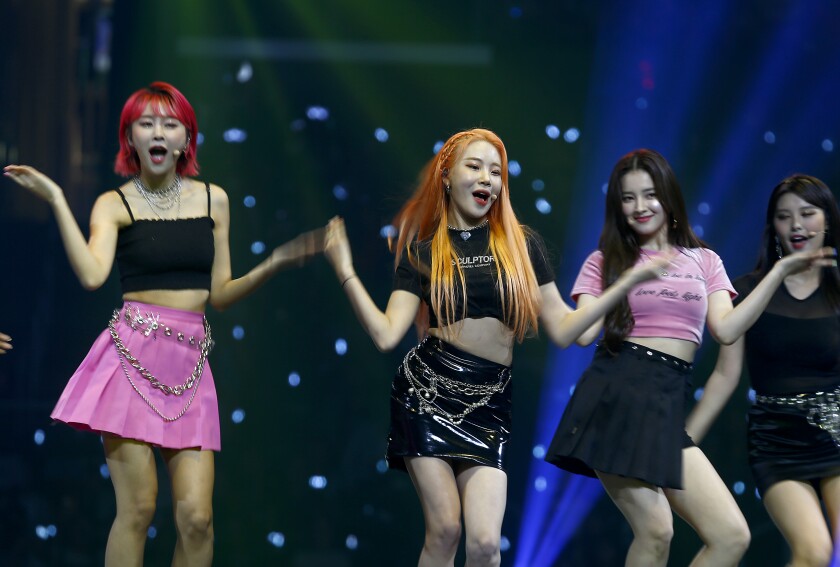 Now that K-Pop is as mainstream as “Ellen” and “Saturday Night Live,” young people with any perceived link to the scene are starting to see some upsides.

“I had a [Korean] friend who started getting so many more swipes on Tinder after BTS got big,” said Kristin Jordan, a 24-year-old K-Pop superfan attending the KCON convention in downtown L.A. on Saturday. Jordan said her friend enjoyed the extra attention, but he wasn’t totally convinced of everyone’s motivations.

“He was like, ‘Should I be feeding into this? Should I start dressing like a K-pop star?’ He kind of started seeing [that attention] in a certain new way,” Jordan said.

KCON, now held in New York and L.A., has similarly blossomed from a niche pop subculture in the U.S. into an enormous industry that’s influencing music, fashion, beauty and digital life. KCON L.A., held annually since 2012, is a now four-day symposium that draws more than 100,000 fans and emerging acts like Ateez, Loona, Momoland and Stray Kids, along with a laundry list of panels, meet-and-greets and dance-offs. Its fans, artists and professionals are grappling with what to do now that it’s getting so much attention — and what debts the scene may owe to other cultures before it.

“In the word ‘appropriation’ is a sense of property. Culture is collective, so it’s tricky,” said Michelle Cho, an assistant professor of East Asian popular culture at the University of Toronto who spoke on a panel about cultural conflict in K-pop. “It can lead to an impasse when you think of it as ‘mine.’ But you have to be respectful of it when an identity is premised on it.”

One striking thing about contemporary K-pop in the U.S. is just how diverse the fan base is: mostly young, but rife with every race, sexuality and gender expression. That heterogeneous fandom upends questions about K-pop as cultural property in the U.S. At KCON, that was fully on display in the concourses of the L.A. Convention Center, as preteen black girls, middle-age Latin men, gay couples and twentysomethings with anime hair all gamboled to take pictures with their idols.

The culture mashup made for some fascinating convergences, but not without some confusion or disputes. “Now you get K-pop groups marketing to Japanese audiences dressed like cholos and then wondering why they’re seeing pushback,” said Miranda Ruth Larsen, a lecturer at Bunkyo Gakuin University in Japan. Larsen studies K-pop’s intersections with race and gender and national identity. While obviously Korean, K-pop is also a sponge for ideas and an aesthetic all its own. It grew from U.S. hip-hop and dance music (and, for that matter, rock ‘n’ roll played on postwar military bases in South Korea) but now it’s reshaping U.S. pop.

“Culture’s always sticky,” Larsen said. “Who has the power to decide how it does and doesn’t travel?”

Sometimes it doesn’t travel at all. Chungha, a former star of the pioneering girl group I.O.I., was one of two acts that missed the show due to visa issues, and KCON fans were quick to blame contentious U.S. border policies (proving that politics are never distant, even at an escapist event like KCON).

But sometimes it travels right into your bedroom. There was a tutorial on K-pop drag makeup, where fans of any gender could learn the scene’s tricks to toy with their presentation. In a scene that prizes gentleness in male idols and where plastic surgery is ubiquitous, the subject was potent. Talks on LGBT fans, dating cultures in Korea and even one for K-pop fans over 30 (we do exist, it’s true) showed how the fandom can permeate into other parts of your identity, and how the growing scene is accommodating more kinds of fans than ever before.

One big theme at this year’s conference was the slow re-emergence of successful girl groups. As male groups like BTS, Monsta X and NCT127 have come to dominate the industry — thanks to the feverish loyalty of their young, female fan bases — many also wondered where the next wave of women will come from. Blackpink and Twice can play arenas, but groups like Loona, Momoland and Iz*One drew some of the biggest devotional screams of the night (Fromis_9, Itzy and Mamamoo would bring their legions on Sunday).

Earlier at the convention, Cody and Wyatt, the two male hosts of the popular YouTube music chat show Gaypop, joined a Blackpink drag show as “Snackpink” and welcomed the possibility of a shift of power and artistry back to women.

“We need female management in the U.S., female

directors. It changes the whole power structure,” Cody said. His panel cohost, Caro Malis, a K-pop writer for Soompi and Nylon, agreed: “Women don’t need to just be cute or your girl crush. They can be anything. The fact that it was shocking when girl groups started wearing pants instead of skirts shows how much it’s changed but also what it was like” just a few years ago.

As the conference turned to a 20,000-capacity concert at Staples Center, those ideas played out in the biggest spectacle the scene can offer. The girl-group Loona’s “Butterfly” teased the hyper-feminine delivery of early-2000s pop with rigorous choreography; fellow women-led act Momoland’s “I’m So Hot” and “Baam” had an even brasher charisma and sax-stomping ‘90s European house vibes. The male ensemble SF9’s “O Sole Mio” was a melange of Korean, Spanish and English that could be mistaken for a Maluma or Ozuna single if you missed the memo that this was a K-pop festival (which, of course, means that K-pop is as truly global as anything else today).

Ateez might have been the breakout act on Saturday, though, with some of the strongest singles of the post-BTS era. “Wave,” “Dancing Like Butterfly Wings” and “Hala Hala” are ultramodern standouts that dip into reggaeton, trap and tropical house. It’s no wonder why RCA signed the group to a U.S. deal, part of a wave of similar moves from majors.

As K-pop seeps into (and absorbs from) every other culture around the globe, it’s given South Korea a new shine everywhere from Tinder to top 40. Those exchanges are never without baggage, though, and KCON fans seemed more than eager to understand and explore them.

And if you got a few new right-swipes afterward, well, K-pop fandom definitely has its upsides nowadays.

Appreciation: ‘Easy Rider’ made Peter Fonda an icon. ‘Ulee’s Gold’ made him an actor to remember