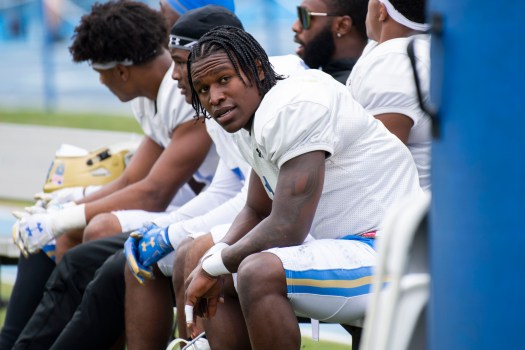 Defensive back Darnay Holmes #1, of the UCLA Bruins, left, on the sidelines during the UCLA Bruins’ spring football game at Frank Marshall Field in Drake Track Stadium in Westwood on Saturday, April 20, 2019. (Photo by Kevin Sullivan, Orange County Register/SCNG)

LOS ANGELES — Defensive back Darnay Holmes did not participate in practice Saturday due to an undisclosed injury. Coaches were not made available to reporters to comment on the injury. Head coach Chip Kelly is expected to meet with reporters before practice Sunday.

With UCLA’s Aug. 29 season-opener at Cincinnati less than two weeks away, Holmes was seen riding the stationary bike during warmups then went directly into the weight room. From a distance, it did not appear the star cornerback was wearing any protective braces.

The junior was the only UCLA player voted to the preseason All-Pac-12 team, getting a second-team nod. A member of the watch list for the Paul Hornung Award, which honors the most versatile player in college football, Holmes led the Bruins in interceptions for the past two years and had a kick return for a touchdown last season, UCLA’s first such score since 2014.

Without Holmes, the Bruins could turn to redshirt sophomore Jay Shaw at cornerback or redshirt freshmen Patrick Jolly and Rayshad Williams. Shaw, a former four-star recruit in Holmes’ 2017 recruiting class, played in all 12 games last year and is UCLA’s anticipated starter at the nickel position.

Running back Joshua Kelley stretched on the field with his teammates at the beginning of practice for the first time since injuring his knee on Aug. 1. However, the redshirt senior promptly returned to the sideline for individual conditioning once drills started.

Fellow running backs Kazmeir Allen and Jahmon McClendon were full participants in practice Saturday. Allen had been hobbled by an ankle injury for the past four practices. McClendon, a freshman, was limited in the past two practices with an undisclosed injury.