A 13-year-old boy with autism and a hearing impairment was arrested Saturday after leading Los Angeles police on a pursuit in a possibly stolen vehicle from Valley Glen to neighboring North Hollywood, authorities said.

The pursuit began about 3 p.m. in the area of Coldwater Canyon Avenue and Victory Boulevard, LAPD Officer Mike Lopez said.

The boy, a Lakewood resident, was driving a utility truck, said LAPD Sgt. Jesse Murphy. Officers did not realize they were chasing a boy, Murphy said, noting that the boy was nearly 6 feet tall.

During the pursuit, the suspect collided with several vehicles in the area of Saticoy Street and Vineland Avenue, but continued his attempt to flee, Lopez said.

The truck then rammed into an apartment building in the 7200 block of Troost Avenue just north of Sherman Way. The teenager “received some injuries,” Lopez said.

After the crash, the boy ditched the truck and ran into a nearby apartment complex, Murphy said. He left the building and surrendered to police.

#Pursuit termination in North Hollywood ends with crash into several parked cars and an apt building. Suspect is 13 years old reported missing out of LAPD 77th this morning. @FOXLA 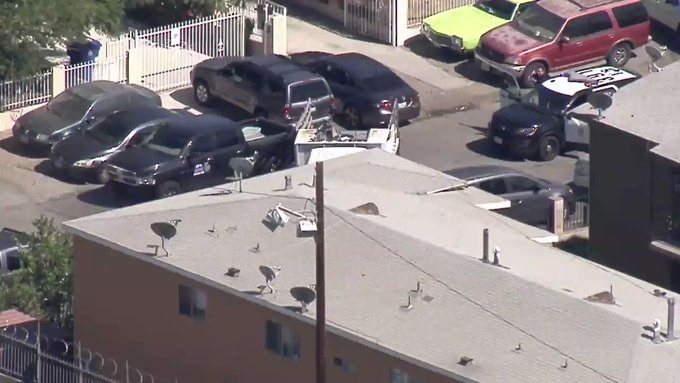 15 people are talking about this

Officers later discovered the teenager was in a missing persons report filed with LAPD’s 77th Division in South L.A.

The 13-year-old is a Lakewood resident reported missing during a visit to South Los Angeles, Sgt. A. Youssef of the Los Angeles Police Department’s 77th Street Station said.

A woman inside the damaged apartment was taken to a hospital to be checked for injuries, according to news reports from the scene.

Injuries were reported to have been minor.

Further details, including why officers attempted to pull the vehicle over, were not immediately available.