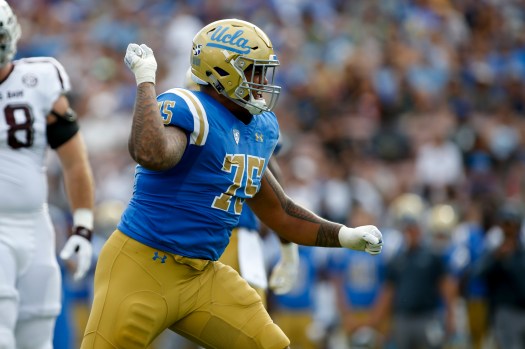 Boss Tagaloa celebrates against Texas A&M in 2017. Since then, he’s changed positions and become one of the top centers in the country. (AP Photo/Danny Moloshok)

Chip Kelly turned the joke into a reality.

“Turns out we were right,” said Quessenberry, UCLA’s former center.

In one year, Tagaloa has done much better than decent. The former four-star recruit went from misfit defensive lineman in a new system to the Rimington Trophy watch list among the top centers in the country.

Once he entered the starting lineup last year after a three-game suspension, the Bruins improved their average yards per game from 218.9 in the first three games to 412.4 in the final nine. With Tagaloa anchoring the line, running back Joshua Kelley rushed for 100 yards in six of the final nine games. Before last year, UCLA had just one 100-yard rushing performance from a running back since 2015.

Quessenberry, a 2018 Chargers draft pick who took every meaningful snap at center for the final two seasons of his career, was both excited and awestruck by Tagaloa’s instant impact. Quessenberry remained a source of advice for Tagaloa and “couldn’t even begin to put it into words” how hard it is to do what his former teammate is doing. Now Tagaloa’s continued progression will be a defining factor in how UCLA advances the offense in the second year under Kelly.

“Don’t lose sight of what’s really important,’” Quessenberry said of his message to Tagaloa. “(That’s) getting UCLA back to where it needs to be.”

When Kelly inherited the UCLA roster, the guru of the blur offense was left with a depleted offensive line group. Jim Mora’s final recruiting class featured five offensive linemen and none remain with the team two seasons later. Only one, Zack Sweeney, appeared in a game for UCLA, playing briefly in last season’s opener off the bench before officially retiring two weeks later.

Rebuilding the offensive line room was Kelly’s top recruiting priority. Although the Bruins missed on several prospects, Kelly still got big-time recruits like Christaphany Murray (Mater Dei) and Sean Rhyan (San Juan Hills). Murray started all 12 games as a true freshman last year. Rhyan recently rose up the depth chart due to a teammate’s injury and could be in position to start at left tackle.

However, the coach’s biggest recruiting pitch may have been for a returning player when he convinced Tagaloa to give up the defensive tackle position where he grew into a top high-school prospect from powerhouse De La Salle High.

“Boss has done a great job and is really the leader of the front,” Kelly said. “He makes all the front calls and the play calls.”

After learning how to snap the ball, diagnosing defensive coverages was one of the most difficult adjustments for Tagaloa. The humble senior deflected credit for his success to his teammates, asserting that backups Sam Marrazzo and Jon Gaines help him every day breaking down film and understanding protections.