'Driven' is the tale of John DeLorean and the informant who brought him down. 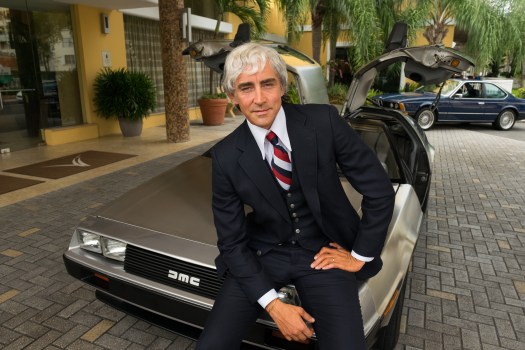 Five days into filming “Driven,” a comedic crime caper based on the true story of carmaker John DeLorean and the FBI informant who enticed him into a cocaine sting operation, a massive hurricane plowed through Puerto Rico where the production was based. The future of the film seemed to vanish on the wind.

“I was just thinking, ‘Man, I was so excited to do this movie; what the hell’s going to happen now?” says actor Lee Pace, who plays DeLorean in the movie that opens Friday, Aug. 16. “And then Nick Hamm, our director, who has got a little bit of the John DeLorean in him, just would not let this movie fall apart. We’d started shooting and he wanted to finish what we had started.

“He was going to keep everyone coming back, and doing it very much like John DeLorean and not giving up on the dream of the car he was trying to make,” Pace says. “I mean, there was no reason we should have been able to go back and finish this film, but he had this force of will that kept us coming back, and he kept getting scenes in the can until we were done.”

“Driven,” stars Jason Sudeikis as DeLorean’s neighbor Jim Hoffman, a career criminal turned government informant, Judy Greer as Hoffman’s wife Ellen, and Corey Stoll as his FBI handler. It’s loosely based on the true facts of the case — DeLorean in fact was arrested in Los Angeles in 1982 and later acquitted after arguing he’d been entrapped.

Although there was a Hoffman who was DeLorean’s neighbor and an informant, he is much more of a fictional character in the film, Hamm says by phone from London. That’s partly because Hoffman disappeared after the trial — Hamm even hired a private investigator to find him but the trail went cold years ago — and partly so that Hamm and screenwriter Colin Bateman could find a way to tell this story that has such an improbable connection to their native Northern Ireland.

“Both (Bateman) and I, having grown up a little bit in Belfast, always were aware of this crazy guy who built a factory in the middle of wartorn Belfast,” Hamm says of DeLorean’s decision to manufacture his signature cars in that country. “It was almost folklore in Northern Ireland, and I was always aware that actually there was a great story here.

“How can you not see a great story?” he says. “A factory getting bombed by the IRA on one hand, and then a cocaine deal in a hotel in California on the other. It’s got everything that Hollywood always loved in a good old tale, revenge, narcissism, sex, cars, parties, and coke.”

He didn’t want to do a traditional biopic, but on spotting the now mostly forgotten role of Hoffman in court transcripts, Hamm says he saw the potential for a tale about two guys from different worlds, both of them desperate to escape the holes in which they found themselves in through hubris and bad judgment.

“They were two faces of the same coin,” he says. “They were both showmen. They both recognized aspects of each other’s character in the movie, and that allowed them a sort of friendship.”

Pace, who played a similarly driven innovative businessman in the AMC series “Halt And Catch Fire,” and this year reprised his “Guardians of the Galaxy” role of Ronan the Accuser in “Captain Marvel,” was cast as DeLorean for his timelessly elegant manner.

“Lee, I think as an actor, possesses that kind of effortless grace that sort of DeLorean had in a funny way,” Hamm says. “He almost reminds you of a ’50s American movie star, the sort of languid ease with which he can hold a cigarette and hold a martini and sit on a sports car. Not many men can do that and also do it with essential style and wit and don’t take themselves too seriously.”

Sudeikis, meanwhile, seemed right for Hoffman because Hamm felt the character needed to be more likable than the real-life informant probably was.

“If you’re going to put as your central character a liar, a cheat, lowlife, who in reality was that, then how do you then make that character to a certain extent endearing or likable to an audience?” he says. “You don’t want to dilute how much they lie or cheat. But what you can do is cast an actor who is fundamentally endearing and likable so as they’re lying and cheating and you’re watching them do it, you’re watching them with a smile on your face.”

Pace, who was born in 1979, the same year cars were originally supposed to start rolling off the assembly line in Belfast, says his earliest awareness of DeLorean came with the release of “Back To The Future” when he was a boy and the use of the namesake car as a time machine. He said he was drawn to the role and the movie by the relationship it depicted between DeLorean and Hoffman. Though unlike Hamm, Pace says he believes DeLorean definitely knew what he was doing, no matter the success of his entrapment defense.

“You see the video where he’s holding the bag of cocaine,” Pace says. “So to what extent he was involved in that, who knows. But anyone who tries to save their car company through a $30 million cocaine deal must have a few screws loose. Much like his car.”

The similarities between DeLorean and Joe MacMillan, Pace’s high-tech visionary in “Halt and Catch Fire,” were also easy to see, he says.

“I find (DeLorean) interesting just in life in a way because I feel like the enemy in his story isn’t really him or that drug deal, it’s reality,” Pace says. “In both of those cases, Joe MacMillan was the story of a guy who had the right idea at the time again and again and again.

“And I feel like John DeLorean is similar in that way,” he says. “This is the guy who created the (Pontiac) GTO, and the Firebird. And the DeLorean, it’s made of stainless steel so it won’t rust. It will be safer for people, last longer. The original idea he had for this machine is pretty exquisite.

“It was all the compromises he had to make to manufacture the car that ended up with it being the clunker it turned out to be. So I think there’s a poetic similarity to Joe MacMillan. They want to crack the mold and do things better than they were done before.”

Returning to Puerto Rico after the destruction of the hurricane to finish the film might have seemed, as Pace suggested, something only a DeLorean-esque persona would attempt. But Hamm says he wasn’t alone in making that decision, which ultimately rested on the ability to do good. Coming back provided paychecks and aid to a few hundred Puerto Rican members of the production and helped keep the island’s film industry afloat — plus it was better than abandoning the shoot and possibly losing the film altogether.

“Initially, it was like, ‘Wow, how are we going to even do this?’” Hamm says, a concern underscored in the short documentary made about the revival of the production. “It wasn’t heroic going back. I was scared. I remember sitting on the plane going back from New York and it was full of military and aid workers and nobody else. And you think, ‘I’m going in the wrong direction … literally the only people on this plane are people with sniper rifles and first aid kids.”

It felt good, though, not to abandon the local production crew, though it took backbreaking work just to get things back to a place where shooting could resume, he says.

“You spent a lot of energy trying to get going again, and then you realize, ‘Oh my god, I’ve still got to go and make the bloody movie,’” Hamm says. “Making the movie, the work is hard enough.