A storm surge watch means there is a possibility of life-threatening inundation over the next 48 hours, with potential surges of two to four feet from Deerfield Beach north to the Jupiter Inlet. State emergency management director Jared Moskowitz said mandatory evacuation orders were being issued in Palm Beach and Martin counties for zones A + B at 1 p.m. Sunday. Emergency shelters were opening at the same time.

While the National Hurricane Center was still predicting Florida would avoid a direct hit, the latest advisory put more of the coast into the cone, warning that storm surges and hurricane-force winds are possible along portions of the Florida east coast through mid-week.

“Only a slight deviation to the left of the official forecast would bring the core of Dorian near or over the coast,” the alert stated.

“For us in South Florida, the message today still is: Prepare, wait and see,” Miami-Dade Mayor Carlos Gimenez said at a news conference that began shortly after 1 p.m. at the county’s emergency-operations center in Doral.

The former Miami fire chief led off by expressing concern about Dorian’s ravaging of the Bahamas.

“I just cannot fathom what the people in the Bahamas are going through right now,” Gimenez said.

He said he was calling the White House to offer Miami-Dade’s urban search-and-rescue teams for deployment to the Bahamas as part of an international relief operation.

Maurice Kemp, a deputy mayor and Gimenez’s interim fire chief, said the teams could deploy as early as Sunday night.

For now, county government is operating as it would on a normal Sunday, with the exception of the closing of PortMiami on Sunday to all vessel traffic.

Port chief Juan Kuryla said the U.S. Coast Guard made the decision, which was expected with a hurricane so close. “That’s typical,” he said.

Gimenez said Miami-Dade’s Solid Waste Department would decide by 5 p.m. whether to cancel trash pick up for properties that have county service on Mondays.

He also noted that while Miami-Dade transit currently plans normal holiday service on Monday, TriRail will not be running trains on Labor Day.

The hurricane was already causing travel snarls during the busy Labor Day holiday weekend. Miami International Airport reported 19 canceled arrivals and 17 canceled departures as of 1 p.m. Sunday due to Dorian, according to Greg Chin, communications director for the Miami-Dade Aviation Department.

At Fort Lauderdale-Hollywood International Airport (FLL), 36 flights had been canceled as of noon Sunday due to the storm.

“We’re being impacted not by the local weather, but by the surrounding areas,” said Greg Meyer, spokesperson for FLL. “We’ve had some cancellations with some of our international carriers. And many of the existing flights were already full because of the Labor Day weekend. But we’re still running at full capacity.”

The eye of #Dorian has made a second landfall at 2 pm EDT (1800 UTC) on Great Abaco Island near Marsh Harbour. Maximum sustained winds were 185 mph at the time. This is tied for the strongest Atlantic hurricane landfall on record with the 1935 Labor Day hurricane. 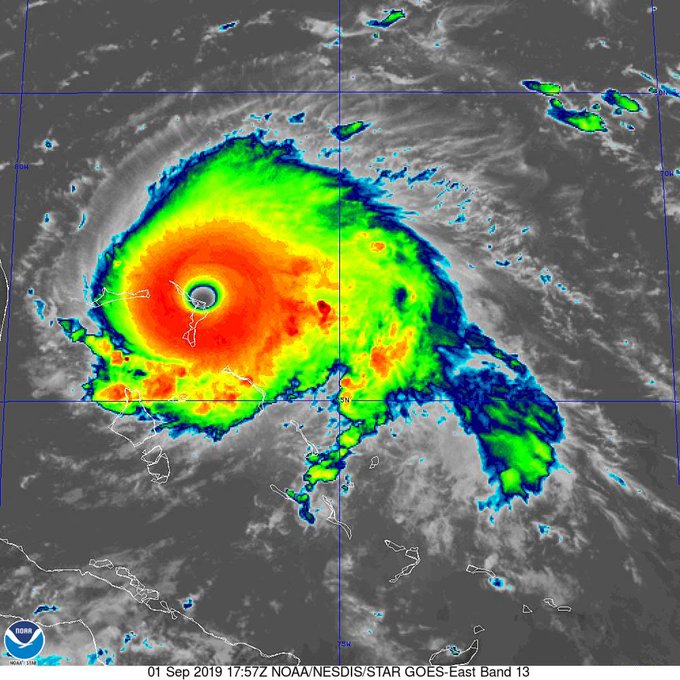 2,680 people are talking about this

The shift in track put the hurricane about 50 miles closer to the Florida coast and increased the chances of wind threats from Miami-Dade to Daytona Beach. The eye of the storm would remain 70 miles offshore, but the closer proximity leaves Florida more vulnerable to slight wobbles in the hurricane’s path.

If the storm continues its current path and speed, its eye would be near Jupiter in 48 hours.

“Since Dorian is forecast to slow down and turn northward as it approaches the coast, life-threatening storm surge and dangerous hurricane-force winds are still possible along portions of the Florida east coast by the middle part of this week,” the 8 a.m. public advisory said. “Residents should have their hurricane plan in place, know if they are in a hurricane evacuation zone, and listen to advice given by local government officials.”

“We continue to encourage residents to prepare as this dangerous Category 5 hurricane comes dangerously close to our community,” read an advisory from Indian River County. “Hurricane Dorian continues to be an unpredictable storm and should not be taken lightly.”

The slight shift in the storm’s expected path was the result of new computer models that suggested Dorian would meander over the northwest Bahamas for the next few days and drift closer to the Florida coast before turning north. The timing of that turn will make a huge difference in how badly the hurricane impacts the state.

He said logistical teams should focus on using in-state mutual aid agreements as the storm’s uncertain track swung slightly offshore in the Atlantic, so that resources would be available for the state’s most threatened counties should Dorian hit hard.

“We’re starting to see more of the Panhandle free up, some of the west coast free up,” he said. The state has already begun using some of those agreements to prepare pumps, transportation assets and sanitation packages, SERT logistics chief Eugene Buerkle said.

But the warnings issued Sunday morning were already having an effect on residents in the impacted areas. At BagelWorks in Boca Raton, a restaurant and deli that boasts “ridiculously good food’’ and is perpetually packed, patrons were still streaming in around 11 a.m. Sunday, though there were a few more empty tables than usual.

Robin Karas, 58, a popular waitress there the past 10 years, lives about 20 miles north of Boca in Lake Worth. But Karas was dutifully serving freshly baked bagels and eggs and breakfast food to her customers.

That doesn’t mean she wasn’t nervous.

“We’ll be notified by tonight when they see what the winds will do as to what’s going on here at work,’’ Karas said. “I’m very nervous and kind of stressed.

“Until the hurricane is out of the Bahamas I am extremely uncertain of what it’s going to do to us, so I’m very prepared. I have to stay with my daughter because her husband is in law enforcement and they have two small daughters, ages 4 and 2. They live about six minutes away from me and have impact windows and shutters and a generator and propane so I feel a little safer there.”

The coming storm didn’t seem to scare off beach-goers and surfers judging by the crowd at Stuart Beach Sunday afternoon, which was breezy, but still sunny and hot.

Rob Paulk, 65, a Florida native and life-long surfer actually drove up from Boca Raton to ride some Dorian-produced swells.

“There’s better waves up here than in the south,” he said. “Out of the shadow of Bahama Bank, most of the surfers in South Florida will come here.”

Alanah Cannovo, 25, lives with her family in Stuart. She decided to come to the beach after her father decided the family would stay home because of the easterly forecast track.

Amanda and Mark Fossati lounged in the sand trying to get away from the constant storm updates.

“I think the Weather Channel is in cahoots with Publix,” Amanda said, joking, but clearly weary of days of changing forecasts and the back-and-forth discussions about staying or going.

“They create a panic, and I’m not falling for it anymore,” she said.

Mark said “he’s a little more conservative” than his wife when it comes to understanding officials, forecasters and journalists preparing the public to impending hurricanes, but by Sunday, he’d had enough.

“So, we decided today we can’t spend anymore time in the house, so we came to the beach,” he said.

Hurricane Dorian descends on US

This website uses cookies to improve your experience while you navigate through the website. Out of these, the cookies that are categorized as necessary are stored on your browser as they are essential for the working of basic functionalities of the website. We also use third-party cookies that help us analyze and understand how you use this website. These cookies will be stored in your browser only with your consent. You also have the option to opt-out of these cookies. But opting out of some of these cookies may affect your browsing experience.
Necessary Sempre abilitato