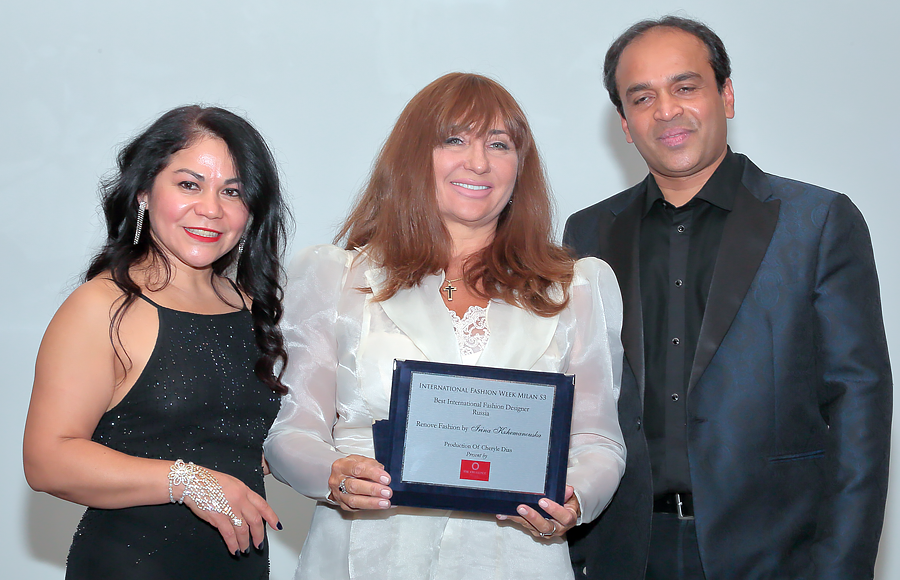 2020, Michelangelo Hotel – Milan, Italy. Local and international designers participated in the
event and were provided with a platform to showcase their latest collection of Haute couture, Party wear, Ready to wear, kids wear, and Bridal collection. The event was attended by Respectable mayor of city Potenza, Michele ILaurino, Ms. Claudia
Cobianchi – wife of Army General Italy, Actress/Dancer Lara Loino, Journalist Nicoletta
Montesano, Media partners from Milan TV, and prominent figures from the fashion world. Celebrity style coach Ms. Ivana Gasto from Italy also graced the show with her presence
The opening show started with dramatic Haut couture looks from Arab designer brand, Renove
Fashion by Najla al Monsour, a reputed International Fashion Week designer from Saudi Arabia. Ms. Najla al Monsour also received the award for Best International Arab Fashion Designer
2020. Debbie Holden from United Kingdom showcased her brand Camilla Couture featuring
luxurious kids wear collection. The third show was followed by Italian Fashion Designer Halide
Kelmendi who presented his Haute Couture & Bridal collection on the ramp, his collection was
beautiful and mesmerized one and all. Mr. Kelmendi was awarded as the Best International
Designer in the Haute Couture category. The next runway showcased exquisite evening gowns
by Irina Kzhemanovska from Russia. Waletty Label from Romania also dazzled the ramp with
her breathtaking collection of evening gowns and party wear. The Finale Closing show was done
by none other than the designer from Philippines, Chona Bacaoco and her fashion brand MM
Milano, her latest collection thrilled the audience and put a perfect ending to the show. Ms. Chona also won the Best International Fashion Designer award. Participation certificates were also awarded to the people who contributed to the success of
the show.

Founder & Managing Director and Producer of the show Ms. Cheryle Dias – said that she is
extremely proud that the journey which was started in 2015 has completed 5 years and running

6
th year of success, we are keep improving and expanding having International Shows in Europe
was a big task but we made it happen a very grand way and no doubt we have completed 3