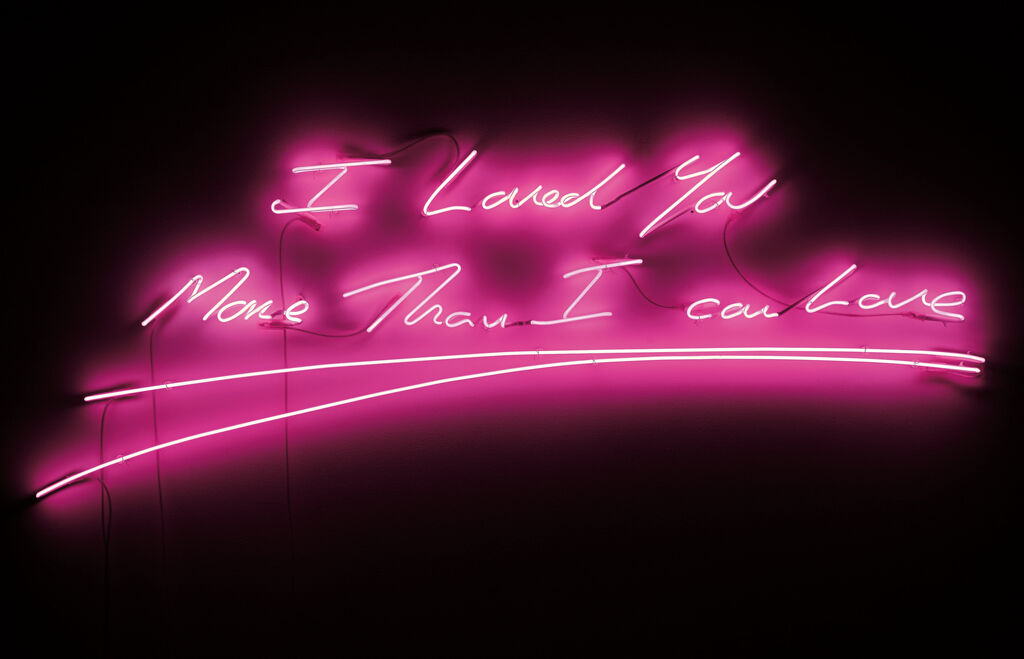 Tracey Emin
I Loved You More Than I Can Love, 2009
Phillips
This week, the flagship outpost of London’s White Cube gallery opens
Tracey Emin

’s first show of new work in the U.K. capital since 2014. To describe this as a big deal would be an understatement: Along with

, Emin is indisputably one of Britain’s most famous artists, a

icon who—in her home country, at least—has well and truly become a household name, the picture of the artist-as-brand. Her work across various media is both deeply personal but instantly recognizable—yet despite its confessional nature, it has become a signifier for a certain kind of luxury consumerism. Her scrappy,

-in-remedial-class drawings of nudes and the hot pink neons of handwritten phrases can be found everywhere from P. Diddy’s collection to the Eurostar terminal at Saint Pancras train station, her cursive as distinctive a calling card as the logo of a high-end fashion label.

As such, Emin’s celebrity could be considered something of an obstacle to assessing the art she makes. If you’re of the opinion that respectability is the kiss of death to artistic integrity, you may well find Emin’s work problematic: As a professor of drawing at London’s ultra-patrician Royal Academy and holder of some ludicrously quaint titles (in 2013, she was appointed a Commander of the Order of the British Empire), it’s fair to say that Emin became respectable long ago. Indeed, possibly as a nod to her public endorsement of his right-wing Conservative party back in 2009, one of Emin’s neon works, blazing the blandly corporate phrase “More Passion,” took pride of place on the walls of 10 Downing Street during Prime Minister David Cameron’s ill-fated premiership. Nothing, and nobody, can get more Establishment than that. 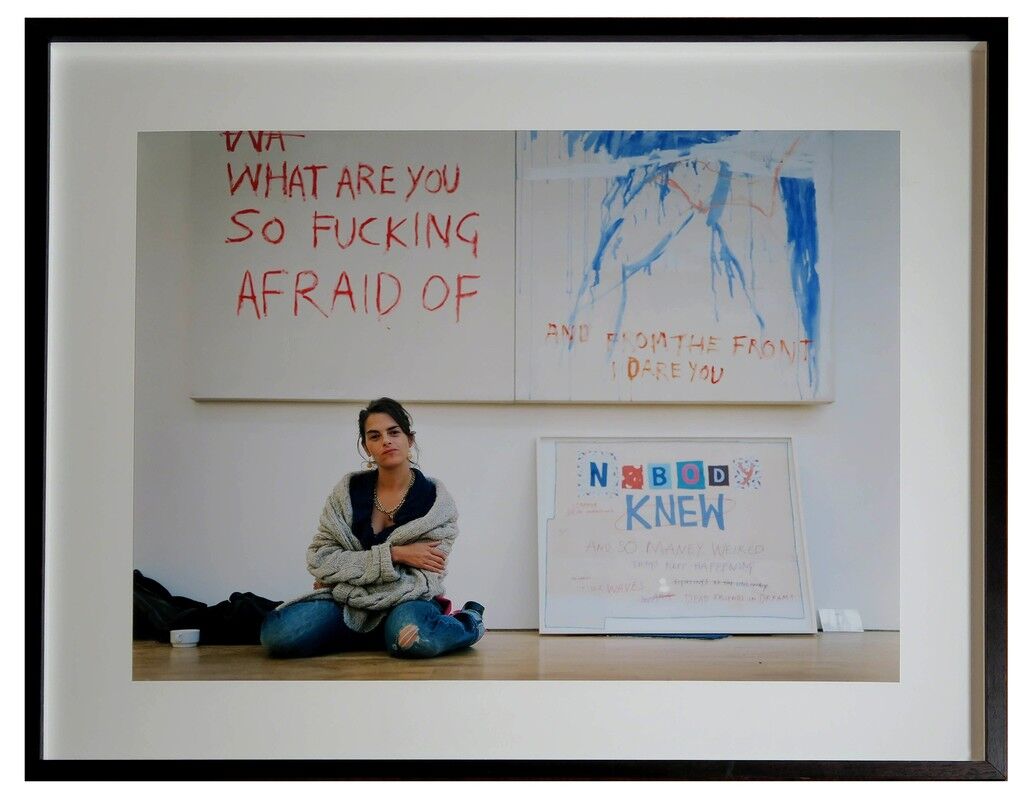 Tracey Emin
Tracey Emin. November 7, 2002 by Jason Schmidt, 2002
Alternate Projects
And yet, for reasons I’ll come to, I will never begrudge Emin the gilded status she occupies in British public life—because, frankly, she deserves it. Twenty years ago, long before she was elevated to the higher echelons of society, Emin was a pariah in the national consciousness. In 1999, she was nominated for the Turner Prize, Britain’s most prestigious art award. Though the financial stakes may be relatively low—£25,000 goes to the eventual winner, £5,000 apiece to the other three shortlisted artists—it is a major event, with the awards ceremony broadcast live on a primetime slot on evening TV. To put it simply, it is the only moment of the calendar year when the wider British public pays any attention to new art—and pay attention they did. Emin’s contributions to the Turner Prize exhibition that year sparked a media furore that enshrined her as the bad girl of British art and made her the target of furious bile.
To be sure, any of the exhibits of Emin’s show-within-a-show would have guaranteed a degree of controversy. There was a punkish tapestry incorporating a crude Union Jack, and some less-than-respectable phrases in appliqué: “They were the ugly cunts”; “No fucking way no”; and, perhaps most memorably, “Pissing pure cider until it rains.” In a small room separated from the main exhibition space, you could watch a truly harrowing film in which she recounted a teenage abortion. More troubling still was her 1995 Super 8 movie Why I Never Became a Dancer,in the course of which her deadpan voiceover relates her sexual history in detail, considered shocking at that time. (“It was something you could just do, and it was for free,” she says at one point.) She goes on to reminisce about entering a dance competition at the age of 15, and when she took to the stage, she was greeted with chants of “Slag! Slag! Slag!” from men in the audience. 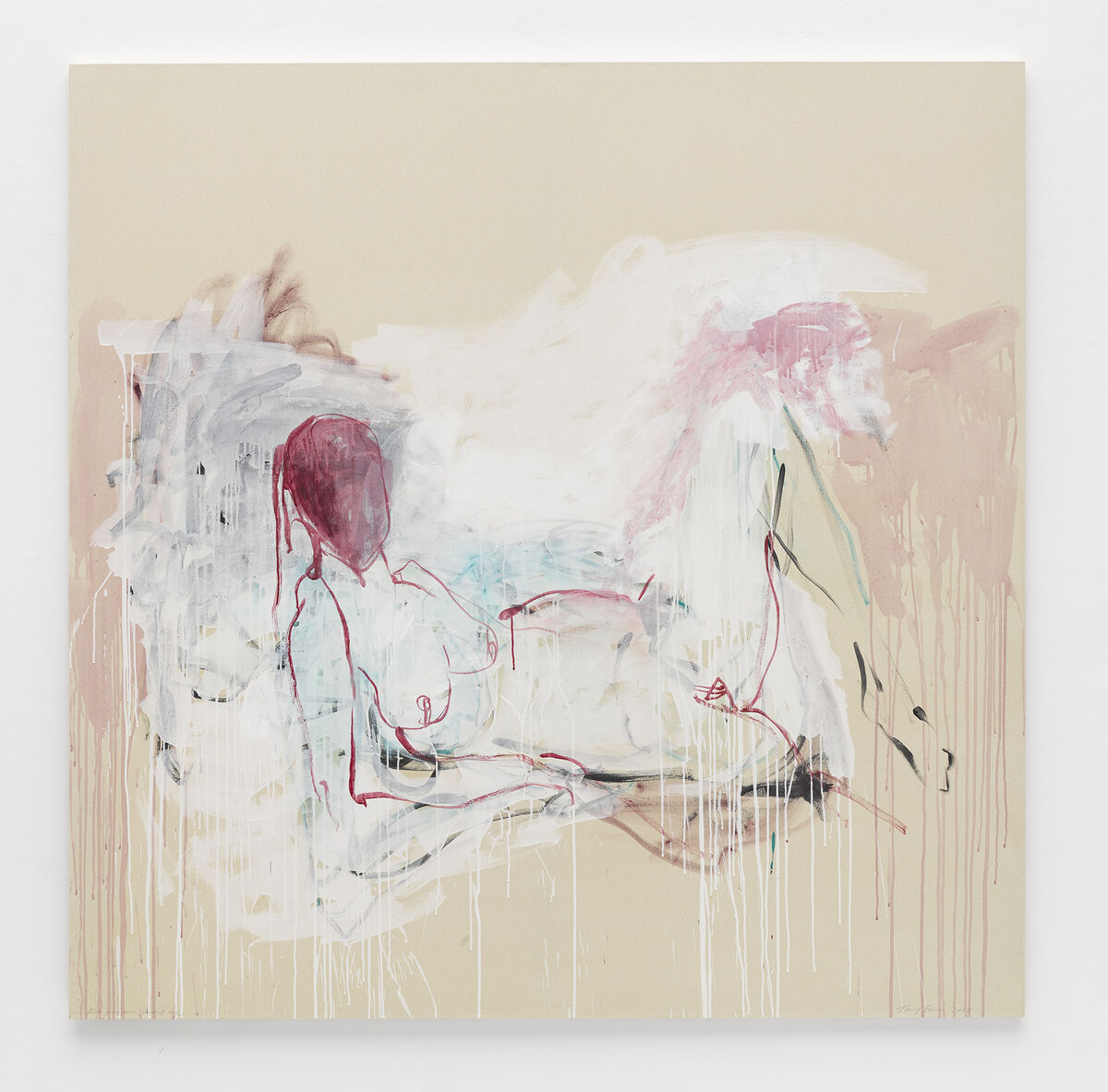 But the main exhibition, the one for which Emin was nominated, proved truly inflammatory. As you entered the gallery, you were immediately greeted by the sight of a bed, the sort of thing you might see in an IKEA showroom. Look closer, though: The cover is unmade, strewn with cigarette ash and traces of indiscriminate bodily fluids; empty packs of cigarettes spill out over the crud-strewn blue carpet next to it, while bottles of spirits and mixers stand upright by its foot, arranged surprisingly neatly given the circumstances; on the floor, there’s a pair of beaten-up novelty slippers, which, in happier times, might have been described as “cute.” Also scattered about is the black-and-gold cardboard support for a pack of Duracell batteries; a wind-up dog, of the sort you might buy in a dollar store; and, most sensational of all, a pair of underwear stained with menstrual blood.
Britain has always had a love-hate relationship with modern art—witness the outrage that greeted the Tate Gallery’s acquisition of
Carl Andre

’sEquivalent VIII (1966) in the 1970s—but nothing has sparked polemic quite like Emin’s Turner Prize show and its centerpiece, My Bed (1999). It inspired endless (and largely negative) column inches, hours of TV reports, countless “my three-year-old could do that”–type observations, and some bizarre responses from the public. A pair of Chinese performance artists were removed by security guards after jumping on the bed, while one woman in Wales was so outraged that she drove the 200 miles to London specifically to clean up the mess around it. Emin “will never get a boyfriend unless she tidies herself up,” as she told the BBC. Art critics were as harsh as anyone. In the Daily Telegraph, Richard Dorment compared Emin’s work to “unprocessed sewage”; TheGuardian’s Adrian Searle, normally an open-minded writer, described it as “tortured nonsense.” 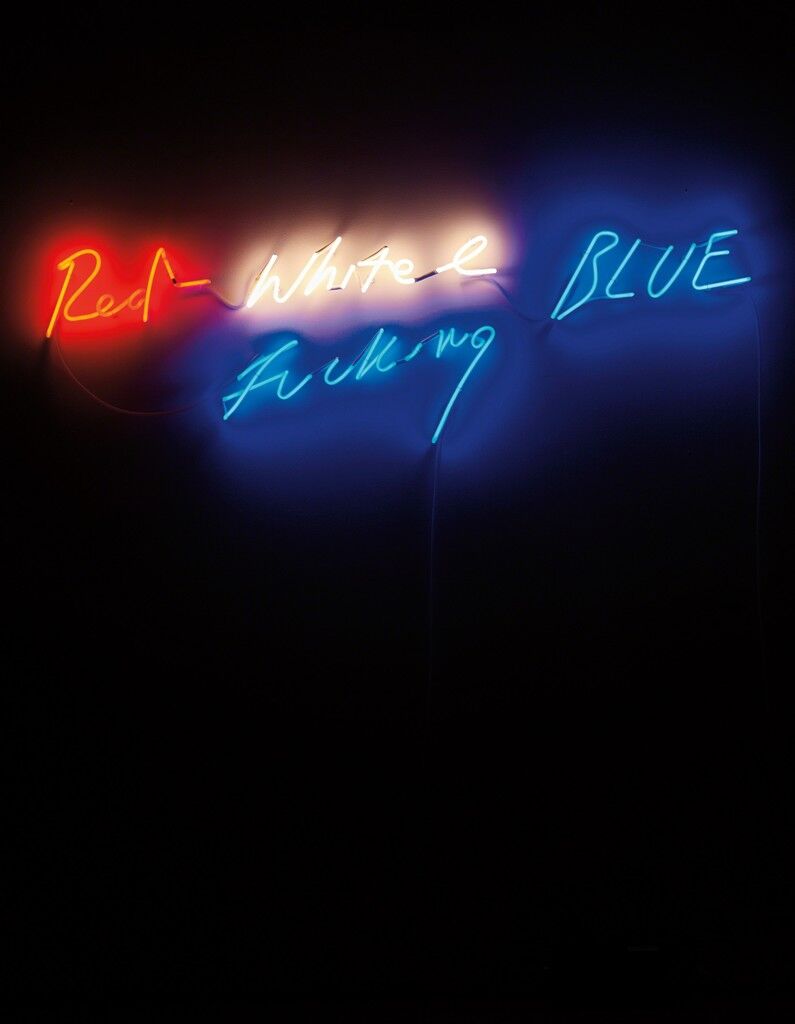 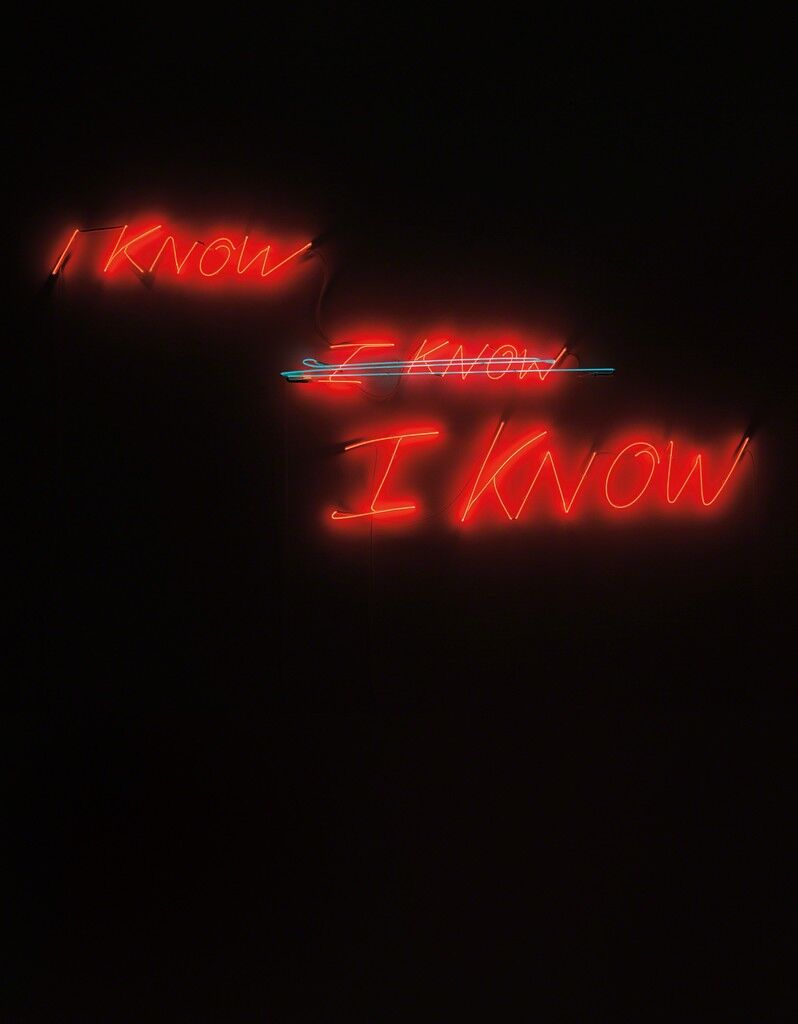 Tracey Emin
I know, I know, I know, 2002
Phillips
This reaction, I think, largely stemmed from Emin’s frankness about sex—not a subject the British have ever been comfortable discussing—and her personality. As some saw it, a woman artist was not supposed to be a loud, outspoken, and unashamedly working-class troublemaker oblivious to the concept of oversharing; less still, as Emin described herself in the video Tracey the Slut (also on show at the Turner exhibition), “an alcoholic, neurotic, psychotic, self-obsessed whinger.” Yet she transcended this barrage of coded misogyny to become one of Britain’s most successful artists, in the process bulldozing accepted notions of what, or—more to the point—whocould be taken seriously in a high-cultural context.
From an entirely personal point of view, the 1999 Turner Prize show was a revelation. At age 10, I visited during the school holidays, and what I saw there had an extraordinary effect. I remember very little about the other nominees (12 Years a Slave director and future Oscar winner
Steve McQueen

, and the kinetic sculptor

) other than the fact that McQueen’s Buster Keaton–referencing film bored me half to death. But Emin’s section of the exhibition remains startlingly fresh in my mind. 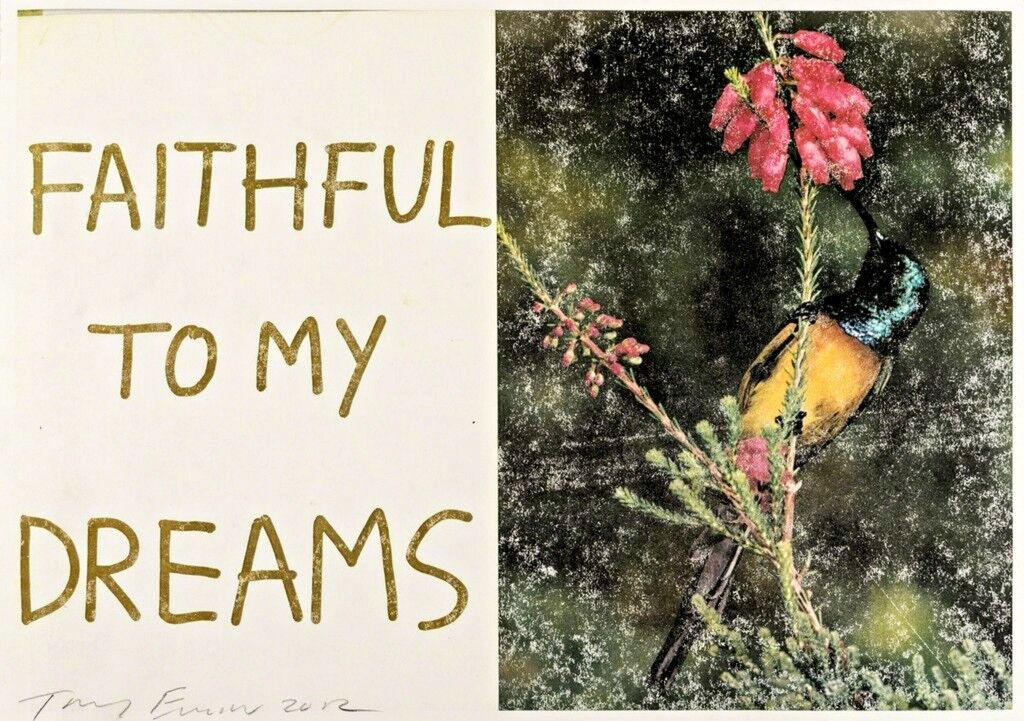 Tracey Emin
Faithful to My Dreams, 2012
Alpha 137 Gallery
At that age, I had only the vaguest understanding of adult life, and sex remained an abstract notion, gleaned almost entirely from the bratty, pornographic lexicon of Blink-182 and American Pie. Emin’s work changed all that. In My Bed, I saw a visceral articulation of what I later learned was known as “depression,” a picture of total emotional paralysis as immediate as any in modern art. But the films were what really worked on me. Suddenly, sex seemed much more than a gross-out joke, something that could leave suppurating open wounds on the psyche: after all, Emin had only been a few years older than my 10-year-old self when she had her first abortion. Nobody I knew, and no film, song, or book, had ever alerted me to the existence of the subjects Emin discussed in her work, and the genius of it was that she narrated it all in visuals and language that even the most incurious of pre-teens could understand.
Most shocking of all, however, was the corresponding feeling that I had lost my innocence. Sitting through the hour-long video reel in the show, I suddenly became aware that I was intruding on something so deeply personal that I shouldn’t be watching. Not that I would have known it as such then, but for weeks after visiting, I was wracked with the weird guilt of the voyeur, and a sense that I had crossed a set of tracks into sordid and unmistakably grown-up territory. We all have warped memories of childhood, but I will never forget the horrible realization that from this point on, there was no going back. It was not the most intelligent art exhibition I’ve seen, let alone the best, yet nothing has ever had such a pronounced, disquieting impact on me. Though it features a return to video work, I doubt her new show at White Cube will leave a comparable impression. But regardless of what she produces, however safe or self-parodic her works become, I could never bring myself to get bored of Tracey Emin.
Digby Warde-Aldam
0%
0 369
Share FacebookWhatsApp