Actor Aaron Paul launches into a blockbuster year with star turns, Breaking Bad buzz and a bushel of emotion. 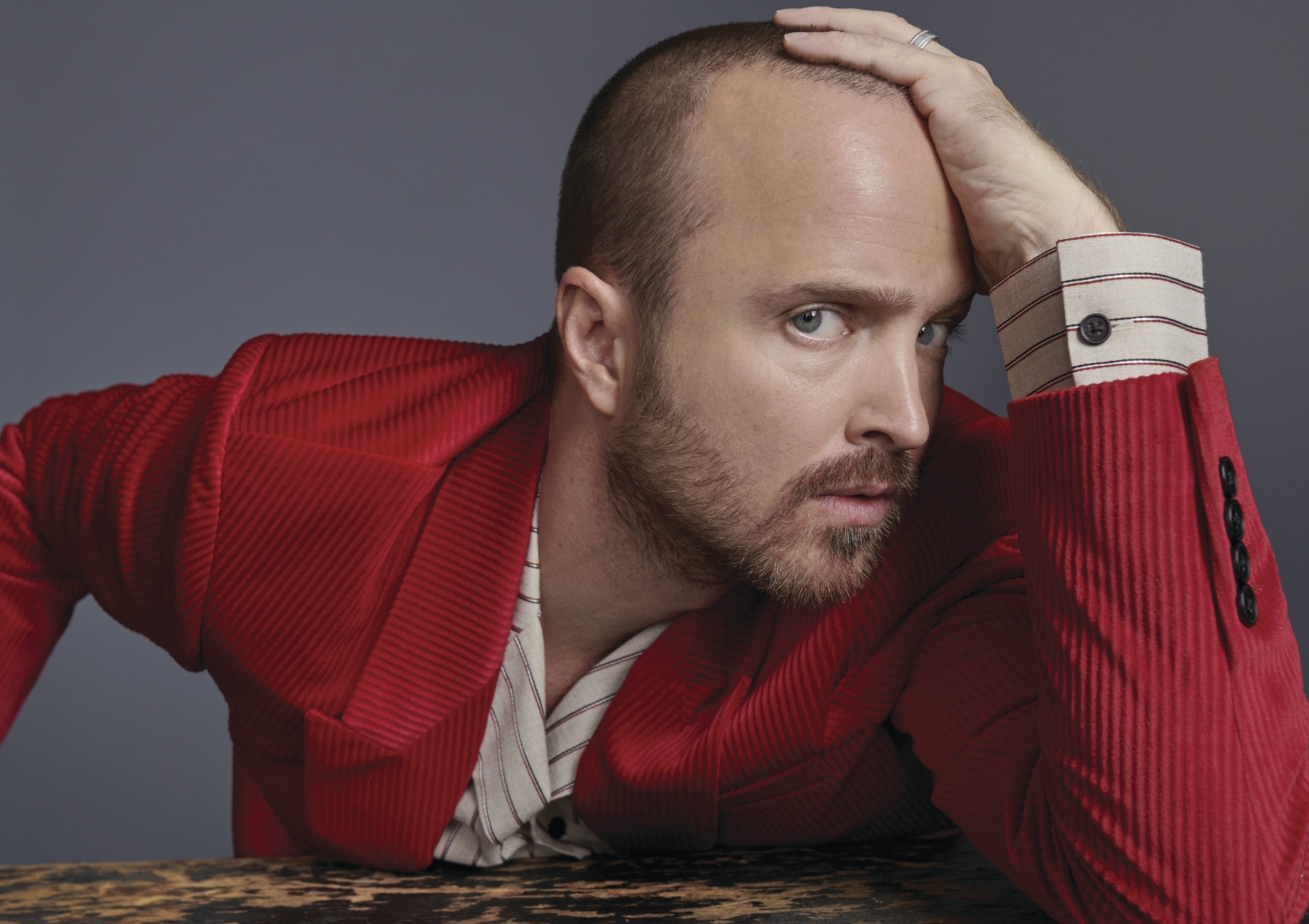 Call it fate. Maybe flakiness. Does it matter? In early February 2007, Aaron Paul bailed on a press tour at the Berlin International Film Festival for no good reason—other than his intuition. “I felt bad,” the actor says. “It was Daydreamer, my friend’s film. I don’t know… I just didn’t want to go.” Days later, he got a call to audition for a new AMC series, Breaking Bad. The role? Jesse Pinkman, a meth dealer and an addict. And it would only be a few episode run. Paul—not a junkie, rather the highly driven, eloquent son of a conservative Southern Baptist minister—slayed the reading. He was so good with co-star Bryan Cranston, in fact, that the producers signed him on as a full-time cast member. The hit show would go on to last five seasons, garnering Paul about every award you can think of.

Paul has repeated that phrase many times during acceptance speeches. They’re the type of words that any struggling actor hopes to say—that stamina and talent are behind any success, but so is being in the right place at the right time. In Jesse Pinkman, Paul found his shot.

Paul, 40, is humble recounting the experience. God knows, he says, his success wasn’t overnight. “I should have boarded that plane to Berlin, given where I was in my career.” There had been movie videos, commercials, bit parts, even a stint as an usher at Universal Studios, but, he says, “I was broke.” 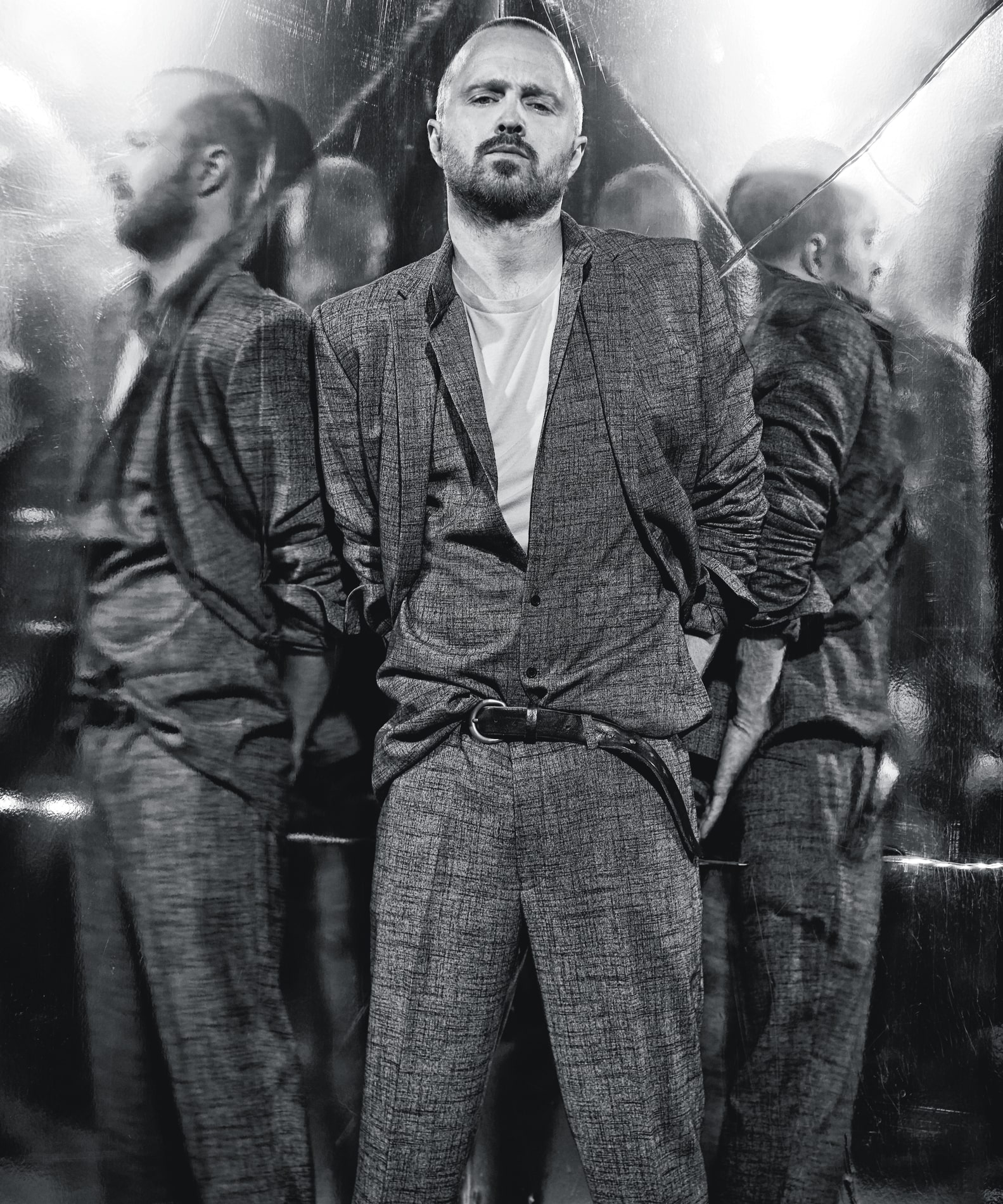 Three-piece suit, $4,200, at dzojchen.com; classic T-shirt, $90, by Sunspel at mrporter.‌com; vintage belt and boots, both stylist’s own.

He’s relaxing today, on a break from filming the third season of the HBO hit Westworld (“I just returned from shooting in Spain and Singapore, which was trippy”) and lounging in his backyard in Los Angeles. “It feels funny to say because I’ve never had one of these before, but I’m in my garden.” Drinking Dos Hombres mezcal, the brand he founded with close friend and former colleague Cranston? “Nah,” he chuckles. “It’s a little early for that.” Paul is a gas: down-to-earth, warm, polite and, in regards to gratitude, the word “woke” comes to mind. “I am just so blessed to have such an incredible friend group. We sort of bathe in such positivity and light and love,” he says. “It sounds like I’m pitching a cult here, but, honestly, it’s really beautiful.”

It’s been quite a year for the actor. He and his wife, Lauren, who’s the founder of anti-bullying nonprofit organization Kind Campaign, celebrated the first birthday of their daughter, Story Annabelle. Now, Paul is sharing the screen with Octavia Spencer in the thriller Truth Be Told, a series created for Apple TV. This month, he’ll produce and star in The Parts You Lose, a drama with Mary Elizabeth Winstead. And, on top of all that, a full-on Breaking Bad movie is due out Oct. 11 on Netflix. Paul admits he was thrilled to “zip on” the Pinkman character again. “I love the guy.”

To the Breaking Bad uninitiated, a viewing of the series is in order to fully appreciate Paul, who breathes life into Pinkman, a flawed, beautiful, ruthless, vulnerable, violent, soulful dude you’re repulsed by, yet root for all at once. (And who changes the word “bitch” forever.) “In the beginning, I was very method,” Paul says. “I found myself in very dark, sketchy alleys at 3 in the morning just to try to get a deeper look inside this world.”

That makes sense, given how drastically different he grew up as the youngest of four children in Boise, Ida. “I love my family so much, and being raised in a pretty strict Southern Baptist household, I think, really gave me a solid foundation.” In other words, hats off to the parents who encouraged Paul to pursue his dreams. “When I was about 11, I said to my parents, ‘Hey, if I graduate high school early, can I move to L.A.?’ And, you know, I’m in middle school, and they said ‘Oh, of course, yes,’ not really knowing that was going to be the case.” What they did know was that their only son always had the TV on. “Stand by Me [the movie] really was the turning point,” he says, “seeing these characters who were 11 and 12 years old experiencing such heavy life experiences. It was super-raw.”

Paul’s Centennial High School drama teacher, Nancy Link, remembers him asking for advice. “He said, ‘Mrs. Link, I want to go to Hollywood. Do you think I should go?’ I asked, ‘Well, is it more important than buying a car? A house?’ He said yes. I said, ‘Then, you should go,’” she recalls. “He had the personality that wasn’t going to listen to critics. He had confidence in himself.” And that was it. “I literally started saving up change in a jar to go to L.A.,” Paul says.

His mother drove him to L.A. at the age of 17—after, yes, graduating a year ahead. And Paul found himself learning the ropes baptism-by-fire style. “I sat in on a couple different acting classes—two to be precise,” he says. “The first one, I walked out midway through. I didn’t understand what they were doing. In the second one, I saw these actors passing a ball back and forth, and saying one word sort of sentences. I didn’t get it. So how I learned was just crashing and burning, and learning from my mistakes, and trying to pick myself back up and march forward.” It didn’t hurt that his face is a remarkable canvas—possessing refined features that can morph into the steely stare of a psychopath (The Last House on the Left, 2009) or a melt-your-heart smiling lover (Smashed, 2012).

Friend and colleague Michelle Monaghan, who worked alongside Paul in Mission: Impossible III and The Path, is a huge fan. “It’s a sincere joy to be in his orbit,” she says. “He’s an incredibly vulnerable actor, emotionally wide open, and there’s a real undercurrent of subtle intensity he brings to his roles. It seems the more complex or provocative the character is, the more relatable he can make it. He can find the humanity in anyone, and it’s beautiful and deeply affecting.” Off set, there are surprises too: “His pranks can go on for weeks.” 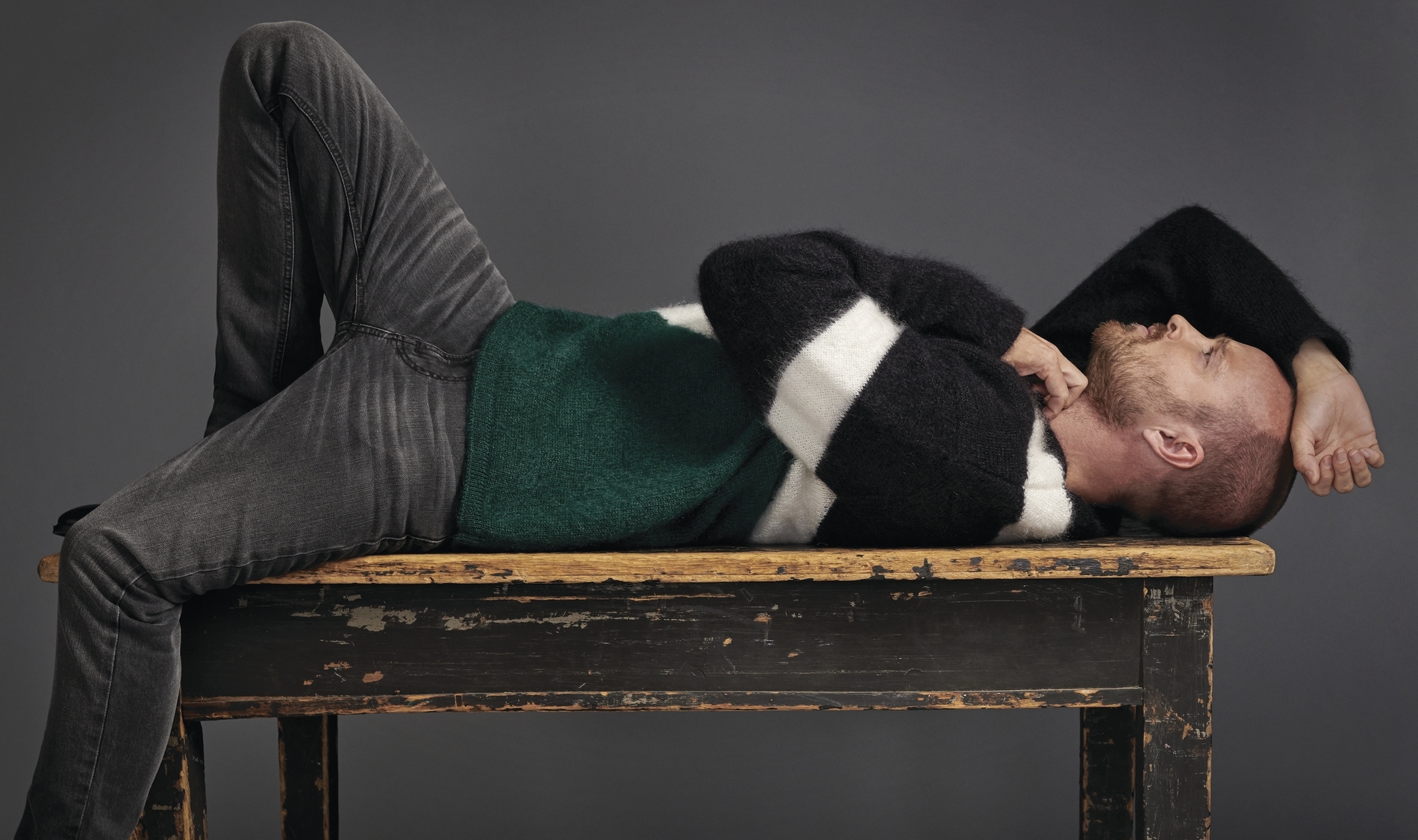 When the cameras shut off, Paul returns to Idaho, where the majority of his family and friends still live. “I spent the past four years building a cabin, and it’s finally, finally done,” he says. “This industry is a bit mad at times, so we just disconnect. My wife and I have a cabin rule: If you want to come, you have to be willing to put your phone away. We love to be in the mountains and float on inner tubes along the river.” Paul also gives back to those who helped him along the way. “After he won his first Emmy,” Link says, “he tracked me down and surprised me during a class to show it to me. I am so proud of him.”

Pride is there for Paul, too, though his heart is not above skipping a beat when he thinks about his life. “I feel very blessed to live in a land of dreamers and to actually be able to say that my dream does exist,” he says. “I understand it’s nothing short of a miracle.”

Kerry Washington Discusses Her Evolution As An Actor, An Activist And An American