Kerry Washington Discusses Her Evolution As An Actor, An Activist And An American

If there’s any question about Kerry Washington’s star power, all you need to do is check out a picture of her from the premiere of her new film, American Son, at the Toronto Film Festival. There she was, sweeping—no, crushing—the red carpet in a traffic-stopping Zuhair Murad Couture fuchsia and gold brocade gown, an elaborate Rihanna-level train in tow. She oozed confidence. The attitude: an I-don’t-care-what-you-think vibe strumming around a yes-I-am-awesome riff. Washington was every inch the queen, the headliner. Why? She was Olivia Pope, of course.

Over seven seasons, Washington starred as Pope, the protagonist on ABC smash hit Scandal who owned her own crisis management public relations firm in Washington, D.C., working primarily with powerful men who did naughty things in the White House and on Capitol Hill. The character was unapologetically fearless and bold, and an overnight role model for many fans of the show. Washington’s approach to her work earned the respect of her co-star Tony Goldwyn, who played the president of the United States and, at times, her love interest. “I felt profoundly safe working with her,” he says. “Good acting requires that you trust your partner. Kerry is such a deeply loving person that you feel a sense of security to go wherever the moment takes you.” Washington won multiple awards, enjoyed arguably the best wardrobe on television and made network history as the first African American female lead since 1974. Mic drop. “Everyone considers it a risk until it works,” she says. “I think we were a success because audiences were ready and hungry for it.” Washington was ready too—it wholly fit her criteria. “I actually looked for roles that scared me because I understand that the way to grow is walking toward things that take you outside of your comfort zone.”

She might as well have walked through fire these past few years with her risk-taking work. Washington starred as Anita Hill in the HBO film Confirmation, the inaugural project from her production company, Simpson Street. (“[Producing] is doing the work to [ensure] everybody has what they need to excel,” she says. “It’s not just being focused on your little circle of storytelling.”) For the movie, Washington worked closely with Hill, who served as an executive producer. Hill, of course, is the attorney and educator who captured national attention for her testimony in the 1991 Senate confirmation hearings for U.S. Supreme Court nominee Clarence Thomas, who she accused of sexual harassment.

And earlier this year, Washington took to the Broadway stage as Kendra Ellis-Connor, a Florida psychology professor whose son doesn’t return home one night, in American Son at Manhattan’s Booth Theatre. The drama revolves around Ellis-Connor and her husband’s desperate search for answers from law enforcement and explores themes of race, marriage, parenting and justice. Nov. 1, Washington will star in the film adaptation of American Son, which she co-produced, on Netflix. It was no coincidence that Washington further pursued this role. “If I challenged myself to reach into my toolbox and play a character that was anti-Olivia, Kendra was it,” Washington says. “She doesn’t have access to the same kinds of power. I have girlfriends who are Kendras, and I have been her to different degrees in my life, but I’ve never seen her in a play or in a movie. I knew her story deserved to be told.”

Listening to and amplifying the voices society often ignores is a strong belief of Washington’s, who has been no stranger to the public service arena. In 2012, she spoke about voter apathy at the Democratic National Convention supporting President Barack Obama’s reelection. (“The Obamas are a good example of humble leadership—inclusive leadership.”) She is a supporter of LBGTQ rights. In 2017, she was a founding member of Time’s Up, a movement promoting women’s safety from sexual harassment, discrimination and abuse. Those are the tip of the iceberg. “I think it’s incredibly important to be civically engaged because, quite honestly, that is the only way democracy works. A lot of my work has been around inclusivity, whether it’s Time’s Up or Black Lives Matter,” Washington says. “We actually are the system if we allow ourselves to be… if we fight to be.”

Born in the Bronx, the 42-year-old actress is the only child of mother Valerie, a professor, and father Earl, a real estate agent. She graduated from the elite private all-female Spence School, to which she attributes a good chunk of her self-possession. “There was an understanding that you could be in any position,” she says. “I mean, if there was going to be a senior class president, it was going to be a woman because the men aren’t present. It didn’t occur to me that wouldn’t be true outside of school. I was more aware that I would be treated differently as a person of color than as a woman.” After graduating from George Washington University, Washington thought seriously about becoming a public school teacher (“I was a substitute teacher in New York Public Schools for a long time.”), but acting riveted her. “My mother was devastated,” she says. “She was a first-generation American, and her parents were from the Caribbean, and there’s a joke in a lot of immigrant families that there are three professions: a lawyer, a doctor or a failure.” Now, with two biological children and a stepdaughter, who she is raising with her husband, producer, actor and former NFL player Nnamdi Asomugha, Washington can appreciate her mother’s reaction. “I think she was just scared to have a starving-artist child.”

When the paparazzi cameras are off, Washington, who lives in Los Angeles, guards her private life—by design. “It’s not just up to me to share my relationships,” she says. “I think my children deserve to decide how they want to engage in public life on their terms. The same is true in my marriage. My marriage belongs to me and my husband. We like it to belong to us.” Her friend and hairstylist of 15 years, Takisha Sturdivant-Drew, who styled Washington’s hair for this photo shoot, weighs in: “She is always thinking about others. She’s always a class act and a true professional when it comes to work and her business.” One place where the whole clan feels comfortable? “Disney,” Washington says, laughing. “We are obsessed.” 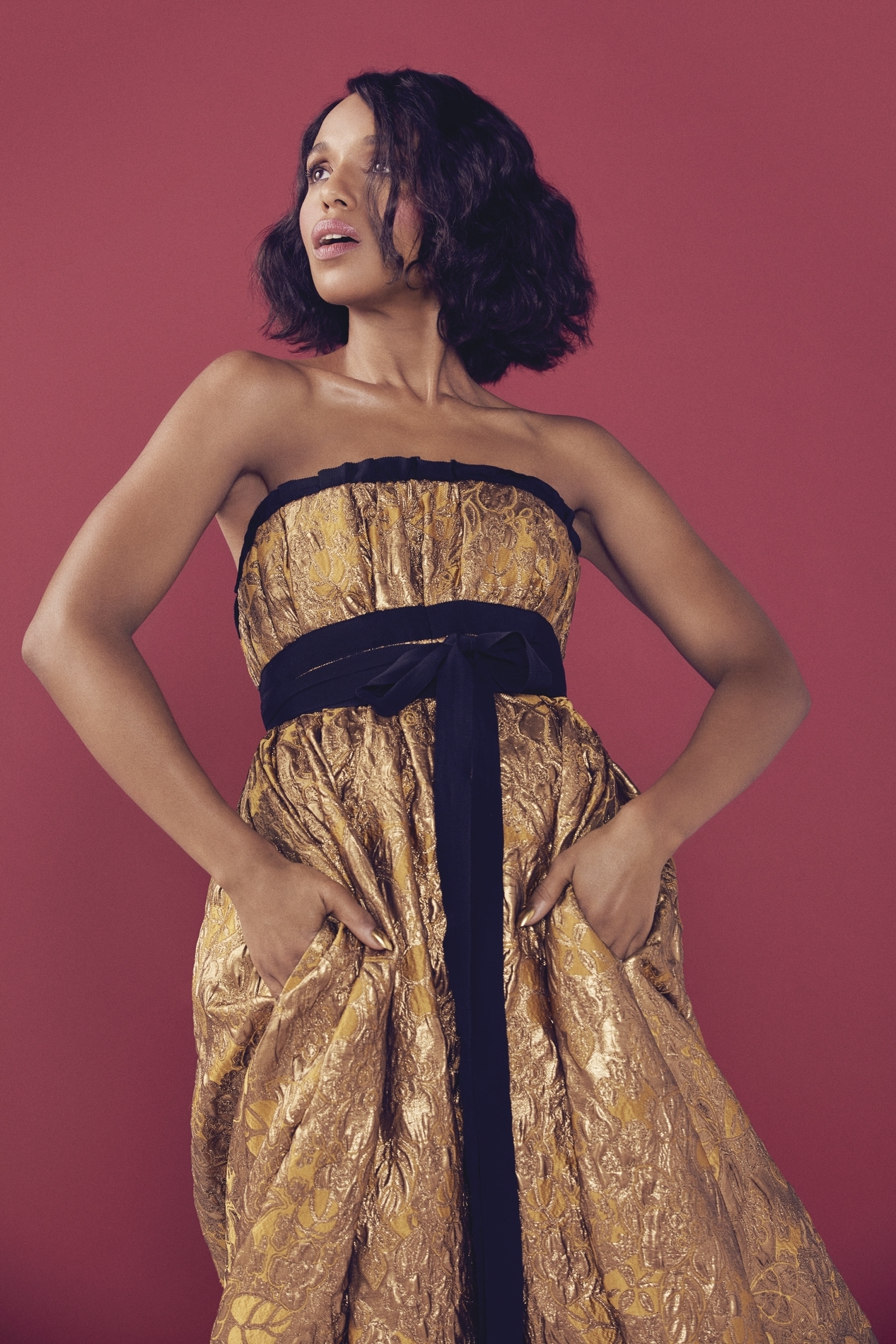 This spring, Washington will release her newest project, playing the character of Mia Warren in Hulu’s limited series Little Fires Everywhere, adapted from Celeste Ng’s bestseller. “It’s an amazing cast,” says the actress, who co-stars alongside Reese Witherspoon. “Every character that I take on requires a different approach. It’s very anthropological for me in terms of figuring out how they think, what they wear, how they walk… just getting to the bone of who they are.” You can bet Washington accepted the role for a specific reason. “I feel like characters come into my life to help me work on myself.” Though she still needs to be challenged, the actress defines that differently these days. “The focus is not just moving toward work that scares me, but also brings me a sense of joy,” she says. And, ideally, imparts a message. “If there was a call to action in my work, it would be that we see and listen to each other. Each of us are deserving of our own hero’s journey.”