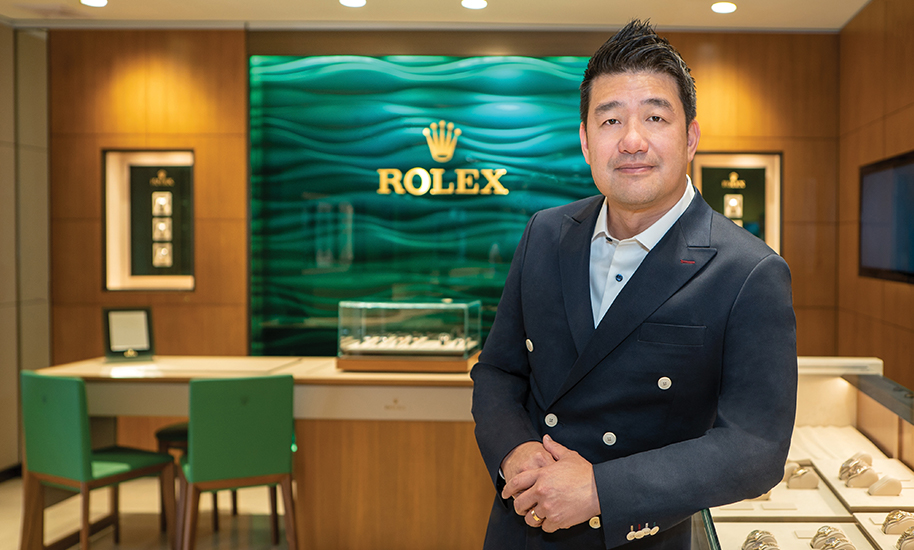 Rare collections are cherished in society today. Some view their collections as an expression of personality or creativity. Others collect for the excitement that comes with use. Chairman and CEO of Hing Wa Lee Group, David Lee – who owns renown Hing Wa Lee Jewelers, which provides the finest selection of watches and jewelry – has a unique and very valuable collection that he likes to drive fast, and often. The famous collector of 30+ Ferraris and other rare and exotic automobiles – valued by some at over $50 million – recently invited us into his car stable to tell us about his collection, how it has impacted his business and personal life, and to reveal his favorite cars.

DREAMS: How did you get started collecting Ferraris and the other treasured autos that are here in your stable?

DAVID: Twenty years ago, I got my Ferrari F355 Spider as a special car to drive. Back then, I had my daily driver and a weekend car. Fast forward a decade and I had started to get more serious about collecting. I collected a Ferrari Enzo, a Porsche Carrera GT and a Lamborghini Diablo 6.0. At that time, I had the trinity of super cars.

Things really started rolling about five years ago when I collected my first Ferrari classic, which is a 1965 275 GTS, and I was hooked. I jumped in completely and started collecting the other models and all the super cars. 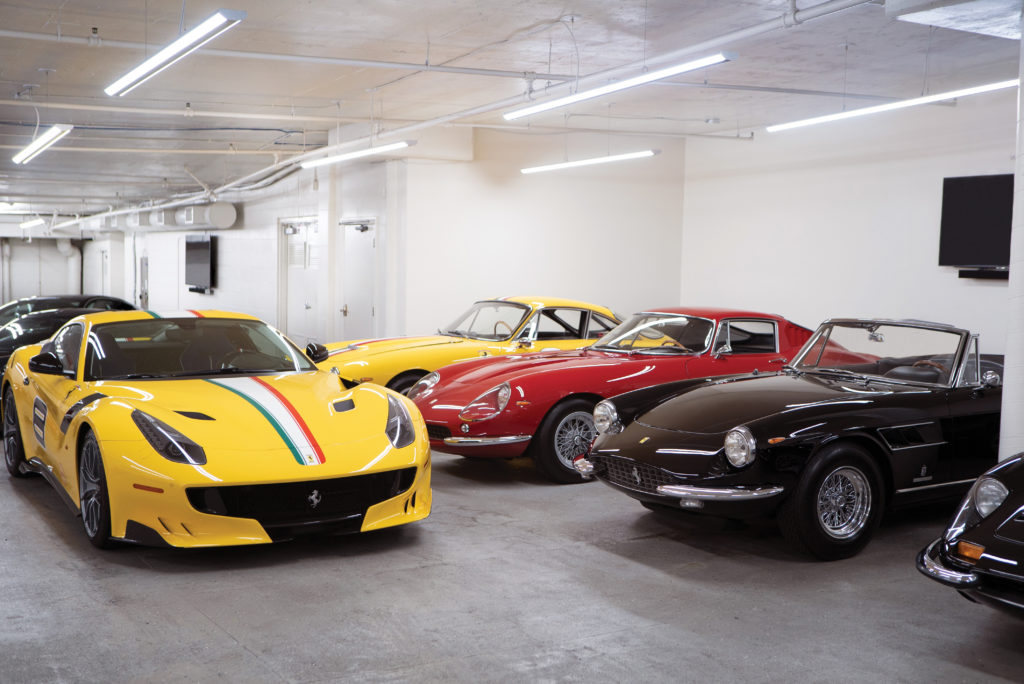 DREAMS: Do you have a strategy for buying and collecting cars? What vehicles do you own today?

DAVID: Every collector has a different strategy. Mine is that I’m a driver first; I like driving my automobiles. Because of this, I kind of limit myself to collecting about 30 cars, which allows me to drive each once a month. I like to drive each once a month as it’s good for the car and it gives me personal satisfaction. If I had too many cars, I would not be able to really experience each car. And because I limit myself to around 30, I’m forced to buy very special cars. It has been said that my 30 cars have a value of some people’s collections with over 100 or 200 cars.

As for the type of cars, I primarily buy Ferraris. I buy the ones that appreciate – blue chip models – and all are Conquest Quality driving cars. Some people have a strategy of keeping really low miles and never driving them – just like a piece of art. But I drive mine.

DREAMS: How has collecting automobiles impacted your businesses and personal brand?

DAVID: Well, first and foremost, I collect cars because I love them. But I did start playing around on social media a while ago, just experimenting because I saw its potential as a business marketing tool for our watch and jewelry stores. It just so happened that my Instagram really blew up. In five years, I grew to 1.1 million followers.

I try to influence people in a positive way with my posts and I enjoy sharing my love of cars with others. And my efforts on social media have really gotten me a lot of exposure – both personally and for bringing in tons of people to look at watches who maybe wouldn’t have known about us before. People might follow me when they see I collect Ferraris and other automobiles, but then they look a little deeper and see that I have the watch and jewelry business, among other businesses and investments. Then they understand that I’m also a businessman and entrepreneur.

Because of social media, a lot of people reach out and contact me. Some want to be in business with me or others want to share things with me. Now, people in many countries, believe it or not, recognize me and welcome me. It has extended my personal brand to a global level. 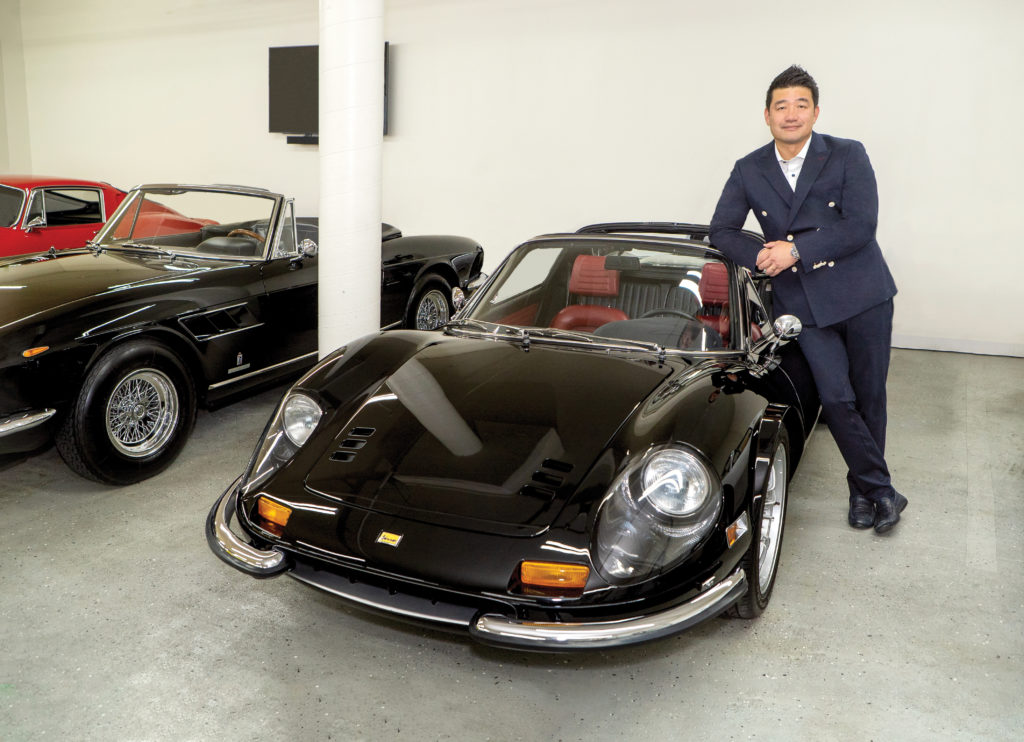 DREAMS: What are your favorite cars to drive?

DAVID: That’s a very difficult question! Like I said, I rotate between about 30 cars at a time, and I like to drive each for a particular purpose.

For example, if I were to drive to a car show where I really wanted to wow people, I would drive the Pagani Huayra because it’s very rare and exclusive; or take my LaFerrari. If I wanted to drive to the beach with my family, I would drive the Rolls-Royce Dawn because it fits four people, it’s a convertible and we’d be driving to an area that’s cooler. If I wanted to drive on say the PCH, where the wind can run through my hair, I would either drive the F50, the 488 Pista Spider or my Monza 3.6 Evo.

If I go to a concourse where I need to show my cars and try to win, I would drive my 1967 275 GTB four cam or my 1967 330 GTS. Those cars have gone into Ferrari concourse events and won Platinum and Best in Show. The 330 GTS actually won Platinum three years in a row, and last year won 100% platinum, no deduction, which is very rare. My other car had won platinum, double prime, two years platinum and Best in Show. If it means winning the best car, the best special car in the whole show, I would bring one of those.

In a classic car rallies type of situation, I would bring my 1964 250 Lusso Competizione. It’s a classic car but it’s a competition car and it will drive and ride much better for rallies and handle various road conditions. On the track, if I wanted to get the best time, I would definitely bring the LaFerrari because it has the best performance and I feel most comfortable going fast in it.

Overall, if I go out to a restaurant or somewhere in public and I don’t necessarily want people to know what the car is – yet still maintain a cool classic element and drive a fun car – I would drive my Monza 3.6 Evo, the car I developed and modified. It has all the special elements and I love driving it.

THE RUSNAK WAY: A JOURNEY TO BECOMING THE GOLD STANDARD FOR LUXURY AUTOMOTIVE DEALERSHIPS IN SOUTHERN CALIFORNIA

A generational love for art and antiques, Todd Merrill is passionate about inspiring…

CLEAR SKIES AHEAD: CIRRUS AVIATION EXPANDS AND GIVES BACK

A generational love for art and antiques, Todd Merrill is passionate about inspiring and presenting artists and ideas…