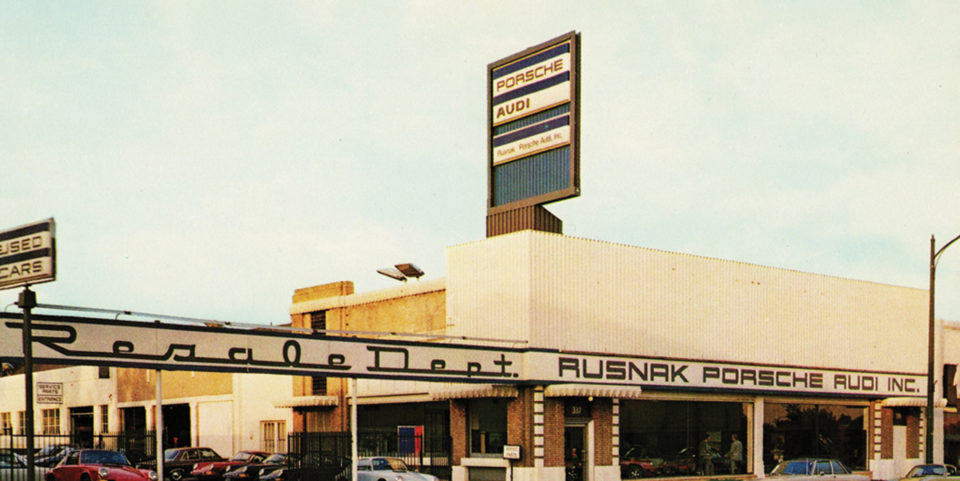 THE RUSNAK WAY: A JOURNEY TO BECOMING THE GOLD STANDARD FOR LUXURY AUTOMOTIVE DEALERSHIPS IN SOUTHERN CALIFORNIA

Drivers on Southern California roads have grown accustomed to seeing a frequent sight in their travels – and that is a shiny Rusnak frame around an auto’s license plate. And more often than not, it is on a luxury automobile, like a Bentley, Mercedes-Benz, Jaguar, Maserati or Porsche from one of the 18 upscale dealerships that make up today’s Rusnak Auto Group. More so, there is good reason for this frequent occurrence.

A Dream and a Commitment 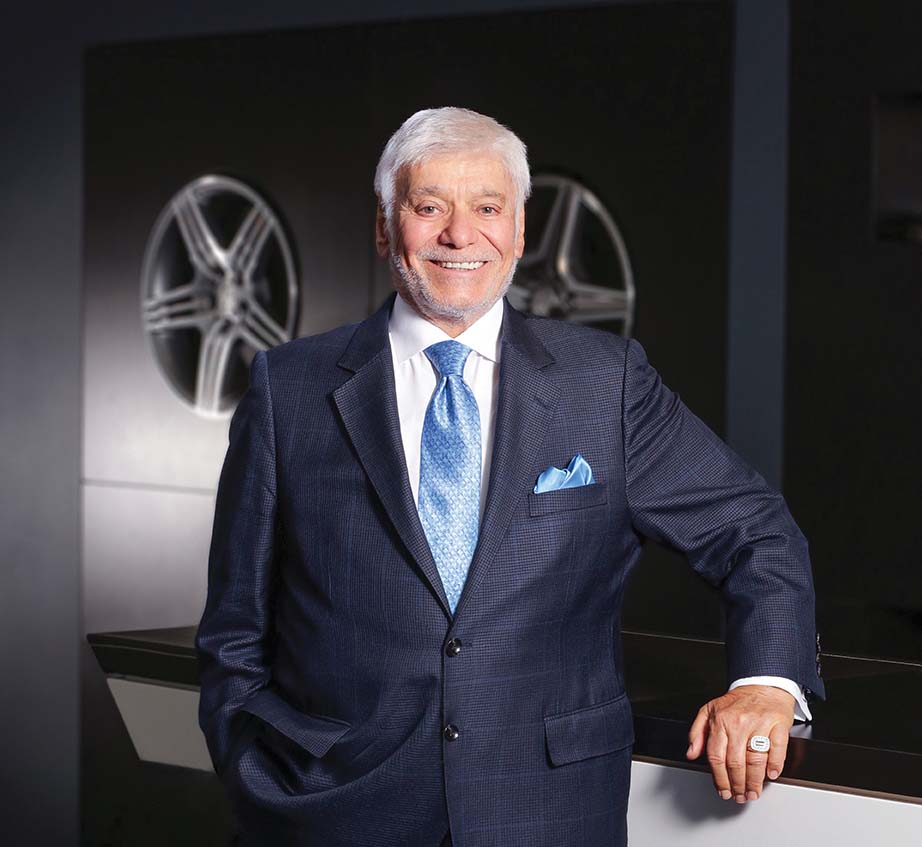 Paul Rusnak was born in Czechoslovakia during the Great Depression. When he immigrated to the U.S. with his family, he saw there was unlimited opportunity all around him. Looking to determine his future in his new home, he noted that automobiles played a big role in the American Dream – especially here in Southern California.

Automobiles were more than just transportation for West Coast drivers. They were a personal expression, an individual statement and – in many cases – represented success and prestige, fueled by a booming economy and great year-round weather.

In the mid-1950s and 60s, Southern California emerged as the car capital of the world. It was an unprecedented time for the automotive industry and a young Paul Rusnak realized it held his future as well.

Starting with family-based European values, he knew he could achieve success and gain prosperity through hard work, determination and initiative – and it is where his automotive dream began. It is also when and where he made a personal commitment to being the very best he could be in all that was to come.

So it began, and in May 1959 he opened a modest automobile dealership in Southern California – the Rusnak/Lazar “Jet Imports” partnership in Culver City. While it was his first, it was far from his last.

What Paul Rusnak set out to do nearly six decades ago is now today’s reality. It is a legacy that continues to grow stronger with each passing year, based on a commitment to being the very best and successfully delivering that pledge to tens of thousands of discriminating drivers – one car at a time – all throughout Southern California.

From his initial dealership in 1959, a determined young entrepreneur launched – and followed – a clear path that would soon determine and refine the sale and service of luxury automobiles in the car capital of the world.

In 1960, just one year after opening Jet Imports in Culver City, Rusnak opened his first “new car” Triumph dealership in Los Angeles. Honing his approach to sales and service and building on lessons learned, he then opened a second new car dealership in 1966 selling Chrysler/Plymouth automobiles on Colorado Boulevard in Pasadena.

In 1970, Paul Rusnak noted America’s fascination with distinctive European imports – for both sleek and fast sports cars and luxury automobiles – especially so in the affluent communities found throughout Southern California. While they were not especially common in the United States at that time, he noted and acted upon a trend in which he would soon become a leader.

He first opened Rusnak Porsche/Audi and another Mazda dealership in Covina soon followed by Rusnak MG, Triumph, and Jaguar in Culver City in 1978 (which would eventually move to Pasadena in 1986).

Historically, during the next two decades Rusnak capitalized on the potential of the upscale Thousand Oaks/Westlake Village and Pasadena markets and opened Rusnak/Westlake Porsche Audi in 1981, Rusnak BMW in Westlake Village in 1984, and Rolls-Royce and Bentley dealerships in Pasadena in 1984 as well.

The Rise of Rusnak Influence

By 1991, and with the opening of Rusnak Mercedes-Benz in Pasadena and Rusnak Volvo in East Pasadena, three key elements had clearly emerged throughout the growth and rise of the “Rusnak Brand” that underscored and propelled his continued success.

The first was offering only the best in European luxury automotive design and engineering. Second, was developing a service organization second to none that kept his customer’s luxury cars in pristine condition. And third, was developing and introducing elevated standards for those in his organization – and ultimately his customers – that have raised the bar and the meaning of “ultimate service” in the luxury car market.

These three key elements are not only a constant within Rusnak Auto Group, they are continually being further enhanced and refined to underscore his original personal commitment and mission to being the very best he could be in all that was to come.

Expansion of the Rusnak Auto Group continued with the 2008 opening of Rusnak Hyundai Inland Empire in Loma Linda – and sparked a flurry of growth and increased activity over the next few years. This included opening the new Rusnak BMW in Westlake Village in 2009, and the purchase of Jaguar Land Rover Anaheim Hills in 2012, marking the first Rusnak dealership in Orange County.

Today, the 18 luxury dealerships that comprise the Rusnak Auto Group are the undisputed “gold standard” for the ultimate in sales and service all throughout Southern California.

Rusnak does not hesitate to comment on the basics of his past success and what it takes to become and sustain as a leader in luxury automobile sales. “I locate my dealerships in prime markets,” he begins. “Obviously, I would not build multi-million-dollar facilities for luxury brands in areas that the demographics do not warrant.”

“I then concentrate on building an organization with ongoing training programs and what we call Rusnak University. It teaches precise standards and guidelines from which we do not, and will not, deviate,” he states emphatically. “We do this to consistently and professionally deliver the absolute best customer experience. Period.”

The Rusnak University curriculum has redefined luxury automobile sales and service in Southern California – with logic and dedication to its core principals.

It begins by cultivating, training and making Rusnak dealerships home for the finest automotive professionals in the industry. It ingrains how to show a deep respect for Rusnak clientele by exceeding their needs and delivering service far beyond their expectations, thus encouraging a lifelong business relationship.

There is also an interwoven work ethic that steadily improves the lives of both Rusnak associates and their clientele by delivering highly personalized service and staying current with all of today’s innovative technology.

The Rusnak organization also fully dedicates themselves – at all levels – to creating a positive impact in their community through charity and social responsibility.

And last, but not least, the Rusnak Auto Group holds itself accountable to the highest possible ethical and legal standards to build a solid culture of trust and respect.

“Our success is based on attention to detail and employee retention,” he adds, “and my motto is ‘developing outstanding employees is the key to delivering outstanding service for our customers’.”

“We understand that drivers here in Southern California have discerning tastes and unique needs when it comes to shopping for luxury vehicles,” Rusnak notes, “and we strive to meet their needs and exceed their expectations in every aspect of our business.”

The Value of Dreams

For nearly sixty years, the family-owned Rusnak Automotive Group has set the bar for luxury auto sales and service in Southern California – from the initial flagship location on West Colorado Boulevard in Pasadena (known fittingly as “Dream Street”) to today’s lavish dealerships spread all throughout Los Angeles, Orange, San Bernardino and Ventura Counties.

Paul Rusnak is justifiably proud of his success, but more importantly, he is proud that he has created something of lasting impact and value for his customers, employees, community and family.

Paul Rusnak knows the value of dreams. “They inspire us to go far beyond anyone’s expectations,” he observes. “Dreams have no limitations. They encourage us take risks… challenges that are carefully calculated and based upon gathering and gaining superior knowledge.”

“Dream beyond expectations,” he encourages, “and you can, in turn, reap exceptional personal, professional and financial rewards… for yourself and all of those around you.”

The pursuit of Paul Rusnak’s dream is why drivers on Southern California roads have grown accustomed to seeing a shiny Rusnak frame around a license plate on the car ahead… and more often than not, on a beautiful luxury automobile. It defines a dream that is today’s reality.