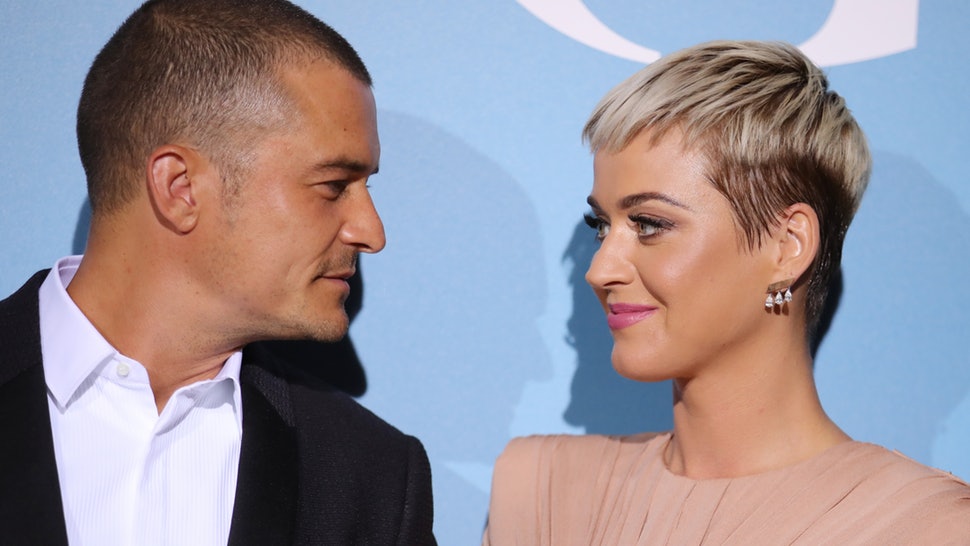 Katy Perry is known for her quirky, DNA-distinct style. From her cupcake and candy stage dresses to her Bettie Page bangs to her many pitstops at pink hair to her couture red carpet ensembles, Perry always rocks unusual looks. That aesthetic applies to Katy Perry’s engagement ring from Orlando Bloom, as well.

Both Perry and Bloom posted the same off-center yet close-up shot of themselves from the eyes up on Instagram. Perry’s flower-shaped ring was on full display while heart-shaped balloons floated in the background. Because #romance.

The ring, which resembles that of a royal, is oval, featuring a massive red or pink stone — depending on the filter, the lighting, and the angle at which you view it— in the center. It’s surrounded by eight smaller stones, which appear to be diamonds. The singer and shoe designer captioned the post “full bloom,” which is clearly a pun referencing both her future husband’s last name and the shape of the rock she’s now sporting.

Rather than a more typical and traditional diamond ring, Bloom popped the question with something so suited to his wife-to-be’s personal style.

The ring is gloriously unconventional. And, reportedly, worth a cool 5 million. Ready for a look?

OMG! Does your heart feel like it’s going to explode from this adorbs shot and that absolutely breathtaking ring? Samesies. Further details about the ring, such as whether it’s vintage, passed down from within his family, brand new and designed by Bloom himself, or custom work, have yet to be revealed.

This comment nails it from top to bottom. The jewelry is so symbolic of the pair as individuals and as a couple.

Bloom used a slightly different filter on his Insta post sharing the good news, which he captioned “Lifetimes.” Aw, how sweet. Melting. That’s basically what my heart is doing RN. In his image, Perry’s ring matches her mani and the stone appears to have more of a pink tone. Red, pink, whatever. It’s uh-mazing.

These comments on Bloom’s post are everything, as well. Fans and the internet are genuinely happy that the couple is getting hitched. They’ve been together since early 2016, briefly split in 2017, and got back together again later that year. Some things are just meant to be.

Congrats to the newly-engaged, future Mr. & Mrs. Bloom. Perry was previously wed to comic Russell Brand and had a high-profile relationship with fellow musician John Mayer, while Bloom was once married to model Mirada Kerr, with whom he has a son, Flynn.

Now that’s we’ve had a few solid looks — gawks, even — at the engagement ring, there is another question on the minds of Katy Cats and fashion fans. What will her dress look like? Will she go with something pink when she swaps vows with Legolas? A Katy-fied take on traditional white? She could go in any direction when it comes to her wedding gown. The only certainty is that her fans will be here for it.